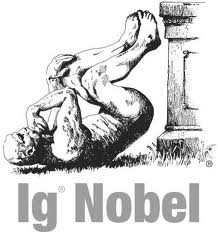 Last night, the Annals of Improbable Research and friends announced the 2010 winners of the Ig Nobel Prize at Harvard University’s Sanders Theater. The awards are meant to “first make people laugh, and then make them think,” and constitute a celebration of bizarre but potentially applicable research. For instance, this year’s Transportation Planning Prize was awarded to the team of Japanese researchers who illustrated how slime mold could be used to determine the most efficient routes for a railway system, and this year’s Peace Prize went to the British researchers whose studies confirmed that swearing relieves pain. There’s usually a dash of social satire as well: This year, BP and a number of investment banks won prizes in chemistry and economics, respectively.

PHYSICS PRIZE: Lianne Parkin, Sheila Williams, and Patricia Priest of the University of Otago, New Zealand, for demonstrating that, on icy footpaths in wintertime, people slip and fall less often if they wear socks on the outside of their shoes.

ECONOMICS PRIZE: The executives and directors of Goldman Sachs, AIG, Lehman Brothers, Bear Stearns, Merrill Lynch, and Magnetar for creating and promoting new ways to invest money — ways that maximize financial gain and minimize financial risk for the world economy, or for a portion thereof.

MANAGEMENT PRIZE: Alessandro Pluchino, Andrea Rapisarda, and Cesare Garofalo of the University of Catania, Italy, for demonstrating mathematically that organizations would become more efficient if they promoted people at random.