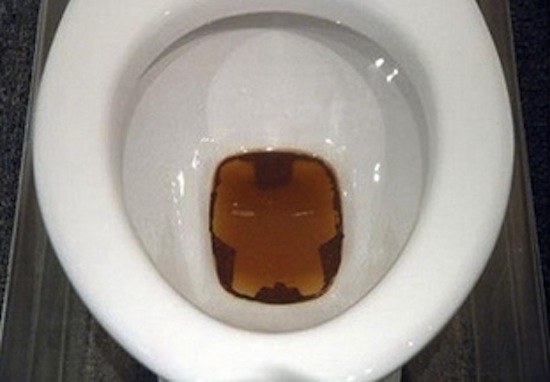 A Taiwanese graduate art student won an art contest for creating the work of art seen above, a bloody, urine Iron Man. The name, unfortunately, is indicative of what the work represents, and what it was created with. One day when the student was taking care of business in the bathroom, he saw blood in his pee, the colors of which inspired him to created the bloody, urine for art purposes.

After spending around two months looking for a toilet bowl that was oblong in such a way that was similar to Iron Man’s face, the student then ate edible pigmentation in order to create black, green, and red urine, which he then turned into the toilet rendition of Iron Man seen above. He also used some of his saliva to make foam used in the piece. Reportedly, at the art competition, his work created a terrible odor.

To put things into perspective, the bloody, urine Iron Man beat out 600 other entrants into the art contest.