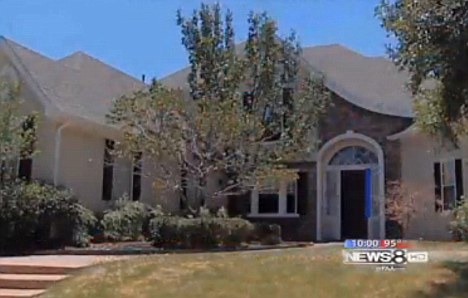 Kenneth Robinson, now of Flower Mound, Texas, spent a lot of time with his nose in the law books and boy did it ever pay off when he could finally afford the $300,000 house of his dreams — with the $16 he had in his wallet. Now, the extent to which he “owns” it is a little hazy, but he’s certainly on the path to owning it, and without having to spend one more dollar. How’s that? Well, upon discovering an obscure and magical property law, Robinson discovered that if a squatter moves into an abandoned house, they have exclusive negotiation rights with the original owner. The original occupant? Walked away. The original owner? A mortgage company that folded. This perfect storm left Robinson in a position to eventually own the house by, no kidding, calling dibs by filing $16 worth of paperwork.

$16 doesn’t seem like a lot, mainly because it isn’t. Here’s a couple of other ways of putting it that make it seem like even less. (According to my shoddy calculations.)

Now, Robinson won’t actually own the house until he’s lived there for three years, but it seems the only way he could be kicked out is if the bankrupt mortgage company paid off the debt on the house and entered into a costly lawsuit. Unlikely. For the time being, Robinson has put up “No Trespassing” signs and has hunkered down for the 3-year squat that he hopes will result in his complete and legal ownership of the house.

The neighbors, understandably, are not exactly pleased. The community, comprised primarily of people who can afford and own $300,000 houses, have spoken out against Robinson who moved in without the purchase and presumably without the fanfare that usually accompanies a new resident in the neighborhood. Their main complaint seems to be that he is squatting and does not own the house. And while that is totally the case, they seem to be butting up against the most important detail of Robinson’s well-researched plan; there is nothing anyone can do about it. Police have already refused to remove Robinson on the grounds that house occupancy is a civil matter and unless the residents have a bake sale and raise the money to pay off the debt against the house, that civil matter is likely to go unresolved.