Could a Zombie Apocalypse Actually Happen? 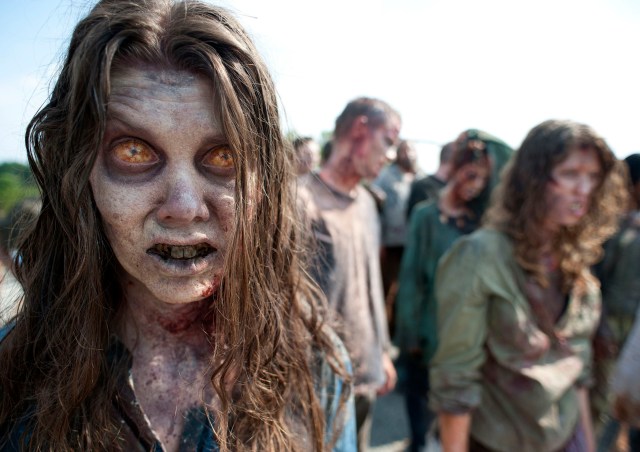 Usually this is something that people only have to worry about in horror movies, but could a zombie apocalypse physically happen in the real world? Admittedly it is not something that should keep you awake at night, but we wondered whether it is scientifically possible for our world to become infected with a zombie virus.

With this in mind allfancydress.com set about asking some of the world’s leading zombie experts their opinion on how likely it is to expect a zombie invasion to reach our shores.

POTENTIAL CAUSES OF THE ZOMBIE APOCALYPSE

An illness also known as bovine spongiform encephalopathy, or BSE for short, Mad Cow Disease is a virus that attacks a cow’s nervous system, causing it to act strangely and lose control of its natural ability to do normal things, essentially becoming mentally ill. The infection causes a cow’s brain to waste away and is believed to come from contaminated food given to cows.

David Youngquist, president of Dark Continents Publishing, said: “A zombie apocalypse could happen. I’m honestly surprised something like this hasn’t happened already. You folks in Britain have Mad Cow Disease; in America we have Chronic Wasting Disease, which is similar, in our deer and elk herds. The parasite can be transferred to humans by consumption of undercooked meat. It wouldn’t take much to burn the human race down.”

Kyle Bishop, author of American Zombie Gothic, added: “I find it highly unlikely the dead will suddenly become animated and begin to attack humans with cannibalistic ferocity and a highly infectious plague. However, could a ‘zombie virus’ develop in the way depicted in the film 28 Days Later? Absolutely. Viruses are evolving and mutating all the time, and who knows what kind of things are being cooked up in secret government petri dishes across the world?”

Joe McKinney, author of hit books such as Dead City, Apocalypse of the Dead, Flesh Eaters, and The Zombie King, told us: “The first and most likely way would be through some kind of biological vector, like a brain parasite or some variant of Mad Cow Disease. Lots of diseases manifest themselves through symptoms that make the infected person behave like a zombie, complete with the shuffling walk and unfocused aggressive tendencies. With only a small antigenic drift one of those diseases could give us a real-life zombie apocalypse.”

Evolution of toxoplasmosa
RISK FACTOR: 2/10
There’s a bug called toxoplasma gondii that infects rats and can only breed inside the intestines of a cat. The parasites take over the rat’s brain, intentionally making it sit as prey to cats to get itself eaten and spread the virus. Half the human population have a strain of toxoplasma in their body, and all it would take is a mild evolution of the virus for it to do to us what it does to rats!

David Youngquist added: “It is possible to have an illness from this that would be pretty horrific. Especially if the parasite made its home in the nervous system or the brain as some of them out there do. As the creature burrows into the brain, brain stem, and nerves, it creates a lot of pain, and loss of memory, muscle control, mental control and the likes. For one person to get it is one thing. It’s bad, but it’s not terribly infectious.

“An outbreak would be difficult to get with something like this. For one person, yes, toxoplasmosis has been known to lobotomize them quite well. A case of the parasite completing its life cycle, and leaving the host a vegetable. Or zombie, so to speak.”

Kyle Bishop said: “I would be very surprised to learn a parasite could accomplish a similar level of control with an organism as advanced and complex as a human being, but perhaps anything is possible with the right kind of evolution.”

Neurotoxins
RISK FACTOR: 9/10
Meet Haitian man Clairvius Narcisse; a prime example of what a dangerous combination of drugs can do to the body and mind. According to reports, Mr Narcisse was poisoned by a mixture of natural poisons with a view to simulating death.

Following his ‘death’ and burial, his body was recovered by a priest of the vodun religion and given doses of ‘Datura stramonium,’ transforming Narcisse into a zombie-like state. The priest had sent him to work on a sugar plantation for two years alongside a number of other zombie slaves. However, following the master’s death, Narcisse walked to freedom and when his regular doses of hallucinogen ceased, he eventually regained sanity. These kinds of mind-controlling drugs in the wrong hands can have devastating effects!

David Youngquist said: “Now neurotoxins are a whole different ball game. There are a vast array of neurotoxins, from snake, spider, and scorpion venom, to mould, viruses, and bacteria. Venom wouldn’t be ideal to create an outbreak, as it would kill too fast, unless you found a way to control it.”

Kyle Bishop added: “Neurotoxins make a lot more sense, especially if one believes the research Wade Davis did back in the 1980s in Haiti. According to his The Serpent and the Rainbow, neurotoxins taken from puffer fish and possibly poisonous frogs have been used for decades by priests as anaesthetics and, perhaps, to create zombies. However, if Davis’ research is correct, the neurotoxins don’t turn people into zombies–they make people appear dead to others.

“Such a victim would be hastily buried (in a hot and humid place such as Haiti), and they would likely suffer severe brain damage (if not death) if they were not exhumed fast enough. According to Davis, the oxygen deprivation is what really turns people into ‘zombies’; they are effectively lobotomized and turned into brain-damaged workers who are very susceptible to suggestion and enslavement.”

Nanobots
RISK FACTOR: 6/10
A technology engineered by scientists, which encourages the building of microscopic, self-replicating robots capable of building or destroying anything. Studies suggest within a decade scientists will have created nanobots capable of crawling inside a human brain and creating neural connections to replace damaged ones—effectively, nanobots will be able to rewire your innermost thoughts. What could possibly go wrong with that?!

Experts predict that sometime, someday, microscopic nanobots will have sufficiently evolved to end civilisation by flooding the planet with the cannibalistic undead.

David Youngquist commented: “Technology is an amazing thing. This could possibly be the greatest way to create a sleeper agent ever conceived. What the CIA and KGB used to try to do with LSD and PCP could now be done with nanobots.

“Program the bots in a certain way, introduce them into a former military specialist, or cop, or FBI agent, or Secret Service agent, and you’ve got the perfect assassin. They do their job perfectly for years. One day they get a cell phone call. When they answer, there’s a pulse of code blasted into their ear from a computer with activates the bots. Perfect. The agent goes into auto mode, carries out his or her kill, and has no memory of the event. In the end, they put a bullet in their own head. Bang. No evidence.”

Kyle Bishop argued: “Theoretically, anything is possible with nano robotics, but I doubt we understand brain chemistry enough to design microscopic robots that can really take over a person’s free will and turn them into programmable robots.”

Cocaine Psychosis
RISK FACTOR: 2/10
In May 2012, a man was shot in Miami having been found eating off the face of his victim. 31-year-old Rudy Eugene was said to be suffering from “cocaine psychosis” which can cause violent, erratic, and paranoid behavior among heavy cocaine users. Eye-witness Larry Vega described Eugene as “like a zombie, blood dripping; it was intense.”

Mass rioting
RISK FACTOR: 3/10
With mass riots and civil unrest, experts fear a spate of global Armageddon scenarios that could genuinely place the wellbeing of the planet as we know it at serious risk.

Joe McKinney continued: “The other way I could see us experiencing something like a zombie apocalypse would be through mass rioting. The news brings us reports of riots from every corner of the globe these days, and it makes me wonder how close we are to going over into complete anarchy.   Should we ever reach that tipping point, we’d have carnage akin to that depicted in films like 28 Days Later and books like The Road. Who knows? We may not be all that far away right now.”

Kyle Bishop, PhD–Dr. Bishop received a PhD in American literature and film from the University of Arizona back in 2009, with a dissertation addressing the cultural relevance of zombie cinema. He has since published American Zombie Gothic: The Rise and Fall (and Rise) of the Walking Dead in Popular Culture. Bishop provides cultural and critical analysis of cinematic zombie tradition.

Joe McKinney —A sergeant with the San Antonio Police Department by day and a successful author of numerous horror, crime, and science fiction novels by night, Joe McKinney’s books Apocalypse of the Dead and Quarantined were finalists for the Bram Stoker Award in the category of Superior Achievement in a Novel. Earlier this year, McKinney’s Flesh Eaters also scooped the Bram Stoker Award for Best Novel of 2011.