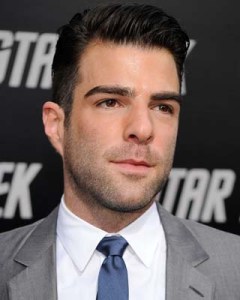 “Doing that play [Angels in America] made me realize how lucky I was to be born when I was born and to not have to witness the decimation of an entire generation of amazingly talented and otherwise vital men … [It was] the most challenging thing I’ve ever done as an actor and the most rewarding … And at the same time, as a gay man, it made me feel like there’s still so much work to be done, and there’s still so many things that need to be looked at and addressed … I look at [suicides following bullying] and say there’s a hopelessness that surrounds it, but as a human being I look at it and say ‘Why? Where’s this disparity coming from, and why can’t we as a culture and society dig deeper to examine that?’ We’re terrified of facing ourselves.” — Zachary Quinto to New York Magazine, confirming tons of Internet speculation about his sexuality, doing what straight people never have to do: publicly verify their sexual orientation. He’s absolutely right: there’s still so much work to be done.