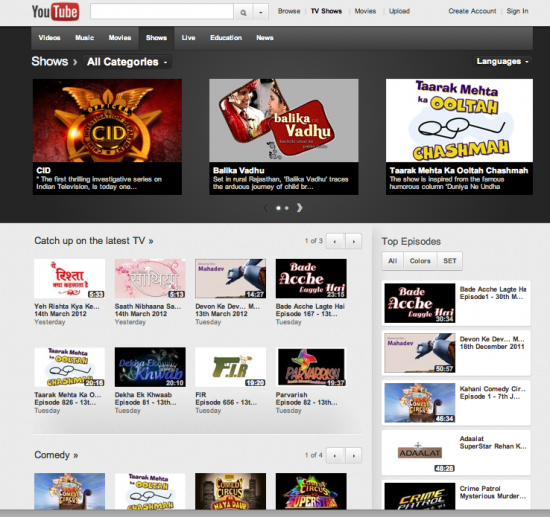 For our India-based readers and fans of Indian television, it’s a great day as YouTube has announced that they’ve reached 19,000 episodes from over 300 Indian TV shows. The shows, which cover six different languages, have been organized into a localized page for viewers in India but can be found here by anyone curious about taking a look. With hundreds of shows to choose from, you should have no trouble finding something to watch.

What’s interesting here is that Indian television seems to be blazing a trail by making their content freely available through YouTube in a way that U.S. and English-language media companies simply aren’t. For instance, the Hindi language page has 4,956 episodes available on a single page with 103 clips of episodes. The Documentary TV page, which was chosen more or less at random, has a mere 1,086 episodes and 203 clips. It’s worth noting that many of the episodes on the Documentary TV page are made by hobbyists and vlogger-type producers, while nearly all of the Indian TV series are broadcast series. Also, a number of the English-language series are not produced in the U.S. — like Terry Jones’ excellent Medieval Lives.

This is, of course, a very rough comparison. However, while most U.S. media companies have thrown their weight behind Hulu and Netflix, which (only usually, in the case of Hulu) require some kind of payment for viewing, free sources like YouTube seem to be somewhat ignored. YouTube was perhaps chosen as the outlet for these Indian programs because of its established infrastructure and global presence.

Whatever the language, it’s heartening to see so much content freely and legally available online. Perhaps more U.S. and English-language series will follow suit, but in the meantime I’m going to try out some of these English subtitled Indian television shows.