Dr. Seuss' Yertle The Turtle Banned At One Canadian School | The Mary Sue 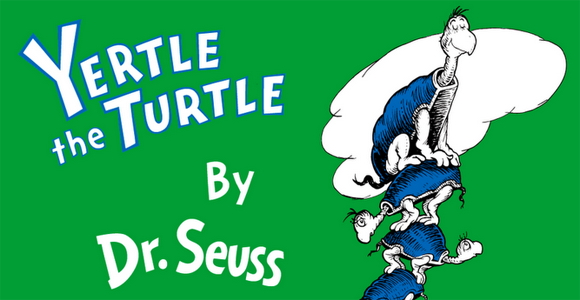 We’ve all heard of books being banned before, and as ridiculous as we may sometimes find the titles on those lists, none may be more ridiculous than this one. A school in Canada has chosen to ban Dr. Seuss’ Yertle the Turtle for being subversive to children. I do not like this one bit, in fact, it has me in a snit. (Don’t worry, that was my one and only attempt at rhyming in this article.)

The book, Yertle the Turtle and Other Stories, by Theodor Seuss Geisel was published in 1958. Yertle is one out of three stories in the book and deals with the king of the pond who stacks himself on top of other turtles in order to reach the moon and yells at them when they complain. So what is it about this tale exactly that has one school worried?

According to the Globe and Mail, because a quote from said book is being seen as a political statement. And one teacher from a Prince Rupert elementary school has been told she should not display it in her classroom. So it’s not that they’re banning the book itself but as they are banning the quote, the book naturally follows. “I know up on top you are seeing great sights, but down here on the bottom, we too should have rights,” is what is causing all the trouble.

Boy, that is some dangerous stuff right there.

“The teacher included the quote in material she brought to a meeting with management after she received a notice relating to union material visible in her car on school property,” they write. The quote and subsequent decision came about during a labor dispute between the British Columbia Teachers’ Federation and the province. “The issue of teachers wearing pins or displaying quotes has come up periodically since they went on strike last year, with the district sending notes to about a dozen teachers about the issue.”

“The advice is in keeping with a 2011 arbitrator’s decision that found political materials must be kept out of B.C. classrooms, said Dave Stigant, who is acting director of instruction for the Prince Rupert School District and who met with the teacher to discuss what would and wouldn’t run afoul of district standards,” writes the site. “And while he conceded Tuesday that it might seem absurd to spend time reviewing quotes from, among others, Dr. Seuss and former Canadian prime minister John Diefenbaker, Mr. Stigant said the review is necessary to protect students from an often-bitter dispute.”

Though apparently, Stignant had no idea the quote came from the famous Seuss book when he read it.

“It’s a good use of my time if it serves the purpose of shielding the children from political messaging,” Stigant said. “I don’t consider it’s taking a stand on the dispute. It’s a matter of legality and living up to our obligation to children and their families.”

The article also mention that, “On Monday afternoon, Joanna Larson, president of the BCTF local in Prince Rupert, noted on Twitter that ‘teachers could be disciplined for displaying a Dr. Seuss quote.’”