Adult Dogs Can Catch Yawns From Humans, But Puppies Cannot | The Mary Sue

Your Yawns Are Contagious to Adult Dogs, But Not to Puppies 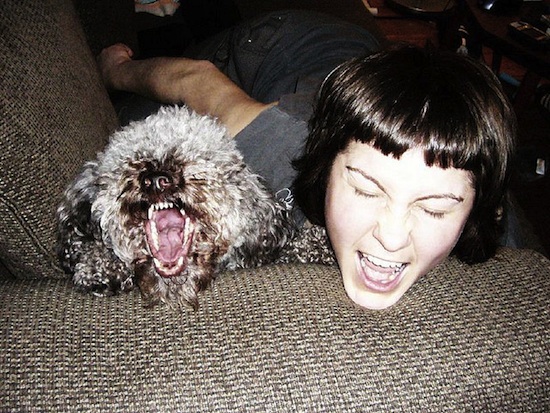 We’re all familiar with the situation where you see someone else yawn, and all of a sudden, you’re yawning too, thinking that nothing would feel better than a nice nap right about now. Researchers studying yawn contagion (yes, there are researchers studying this) have come to some truly weird insights about the behavior. While yawns can prove to be contagious across species — your dog will yawn if it sees you do so, and often vice versa — catching a yawn seems to be a learned action, as puppies and babies don’t show the same propensity to yawn when they see someone else do so.

In the study, published this week in the journal Animal Cognition, researchers from Lund University in Switzerland found that watching humans yawn can make dogs yawn, but not if the dogs are younger than seven months old. In what sounds like the single best experiment of all time, they studied 35 dogs by playing with and cuddling them, and then yawning. Only dogs older than seven months yawned contagiously when their play partners did so. While it may seem weird that a trait that feels so unconscious would actually be acquired, that result dovetails with previous studies showing that humans don’t yawn contagiously until about the age of 4.

The body of research on contagious yawning so far suggests that it’s not a function of actually being tired or needing to yawn, but a sign of a harder to measure quality: Empathy. The take away here, of course is that while adult dogs have learned by watching to yawn along with humans, puppies are pretty much sociopaths. Fuzzy, adorable, little sociopaths.