Canine OCD May Be A Thing, Tail Chasing Dogs Now Sadder Than They Are Cute 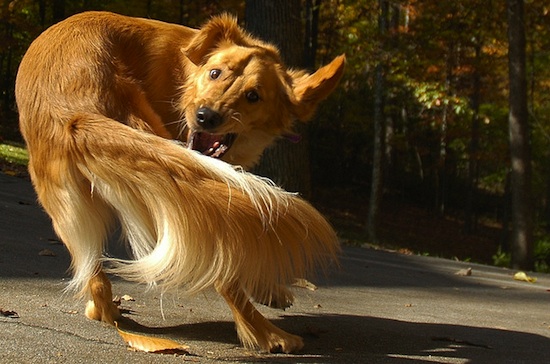 Prepare to feel terrible about every time you’ve ever laughed and encouraged a dog that was chasing its tail, because it turns out that is basically like clapping and cheering on someone struggling with OCD, except that chasing a tail is way cuter than turning the lights on and off a set amount of times before leaving a room. A recent study in the journal PLoS One suggests that tail chasing could be a symptom of a canine analogue to obsessive-compulsive disorder (OCD). Truly, this is the saddest of all mental illnesses, with the possible exception of the obvious schizophrenia exhibited by every cat, ever,  anywhere in the history of time.

According to research headed by the University of Helsinki, tail chasing is a poorly understood behavior in dogs, and may well be more important than previously realized, as it shares many traits with OCD in humans. Like OCD sufferers, dogs tends to start chasing their tails early in life, and the behavior seems to be influenced not only by a variety of factors like genetics, nutrition, and environment. It also appears that certain breeds — like German Shepherds and Bull Terriers — are more inclined to experience daily, sometimes problematic tail chasing, and that dogs that chase their tails regularly are more inclined to demonstrate other compulsive behaviors like compulsive licking.

Having a simpler version of OCD in animals could offer scientists insight into this complex disease and how it affects human sufferers. An animal model could help scientists find gene regions implicated in OCD, or learn more about environmental factors that can influence the disorder, and lead to new treatments further down the road.