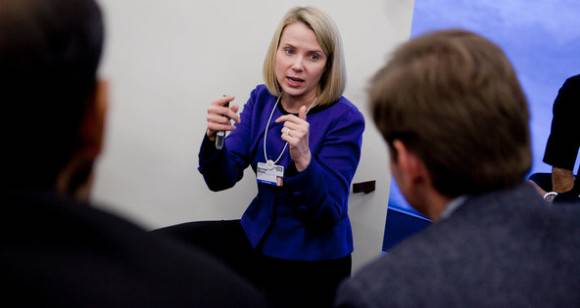 After a year-long search for their next top executive, Yahoo has finally settled on a new CEO — Marissa Mayer, former Google engineer and self-proclaimed geek, will take the helm of the Internet giant this week, establishing her as one of the most powerful women in Silicon Valley.

Marissa Mayer is no stranger to blazing trails for women in technology — she was Google’s 20th employee and first female engineer, a position which earned her the title of “Googirl” amongst her colleagues. During her time at Google, Mayer spearheaded some of the company’s most successful user-oriented projects including Gmail, Google News, and Google Maps. A lover of minimalist design both in and out of the office, she also ensured that Google’s search page utilized a lot of white, open space and sparse decoration.

After witnessing Yahoo’s year-long revolving door of CEOs, including the strange case of Scott Thompson, the former CEO who admitted that he fabricated his resume to include his non-existent Computer Science degree, many analysts and important figures in the tech world are breathing a sigh of relief in response to Yahoo’s new executive: “We believe Mayer’s background as one of Google’s earliest engineers and her experience overseeing key products suggests the company will refocus on the user experience and pace of innovation,” JPMorgan analyst Doug Anmuth wrote in a note to clients. “Importantly, we believe Mayer may also be able to attract more high quality engineering talent to Yahoo!, which we think is needed after several years of strategic and leadership flux.”

Mayer will undoubtedly use her design and user-interface-driven experiences at Google to create the innovative products Yahoo needs to even begin to compete with Google — in a statement released Monday, Mayer said that she “look[s] forward to working with the Company’s dedicated employees to bring innovative products, content, and personalized experiences to users and advertisers all around the world.” But will her products elevate Yahoo to it’s former glory? Although that seems to be the billion dollar question for Yahoo, her new position among the elite women of Silicon Valley (a small group limited to Facebook’s Sheryl Sandberg, Meg Whitman of Hewlett-Packard, and Virginia M. Rometty of IBM) begs another interesting query: How will Mayer’s appointment impact the state of gender and technology?

In what almost seems like a cosmic response to the recent collective cultural hand-wringing about whether or not women really can ‘have it all,’ Mayer, in addition to being hired as Yahoo’s new CEO, also recently announced that she is pregnant, cementing her as both a burgeoning executive and a role-model for working moms and girls interested in technology and motherhood everywhere. We wish Mayer the best of luck as she endeavors to not only change the face of Google, but also the gender landscape of the tech-world!

(via The New York Times, CNN, and Time.)