The Y: The Last Man Movie is As “Close As It’s Ever Been” 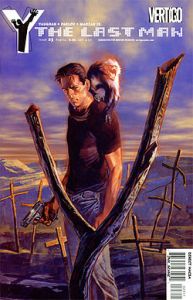 “We’ve got a script that’s as close as it’s ever been…That could go into production next year…The first movie is meant to function as a standalone, but hopefully continue. Hopefully there will be others.”– Screenwriter David Goyer on adapting Brian K. Vaughan and Pia Guerra‘s 60 issue comic Y: The Last Man into a film.

Goyer discussed his writing of the Y: The Last Man script in the context of his work on Man of Steel.  Y:The Last Man tells the story of Yorick Brown, the last man on earth, as the title would suggest, after the rest of the men mysteriously die off.  If this Eisner award winning series does get adapted to the screen, we could see an awesome story told on the big screen, and potentially many interesting roles for actresses.  Not only is the idea of a first movie extremely exciting for fans of  Yorick and his story, but Goyer gives us even more reason to be excited, implying that at least he has interest in more than one movie based on the comic series.  Of course, we have to see the first movie get made, and do well, before we can hope for a second, but this is definitely a step in the right direction. We previously saw this project get a director, Dan Trachtenberg.

Previously in Y: The Last Man