The Return of Xena: Warrior Princess Gives Us the Hero We’ve Been Crying Out For 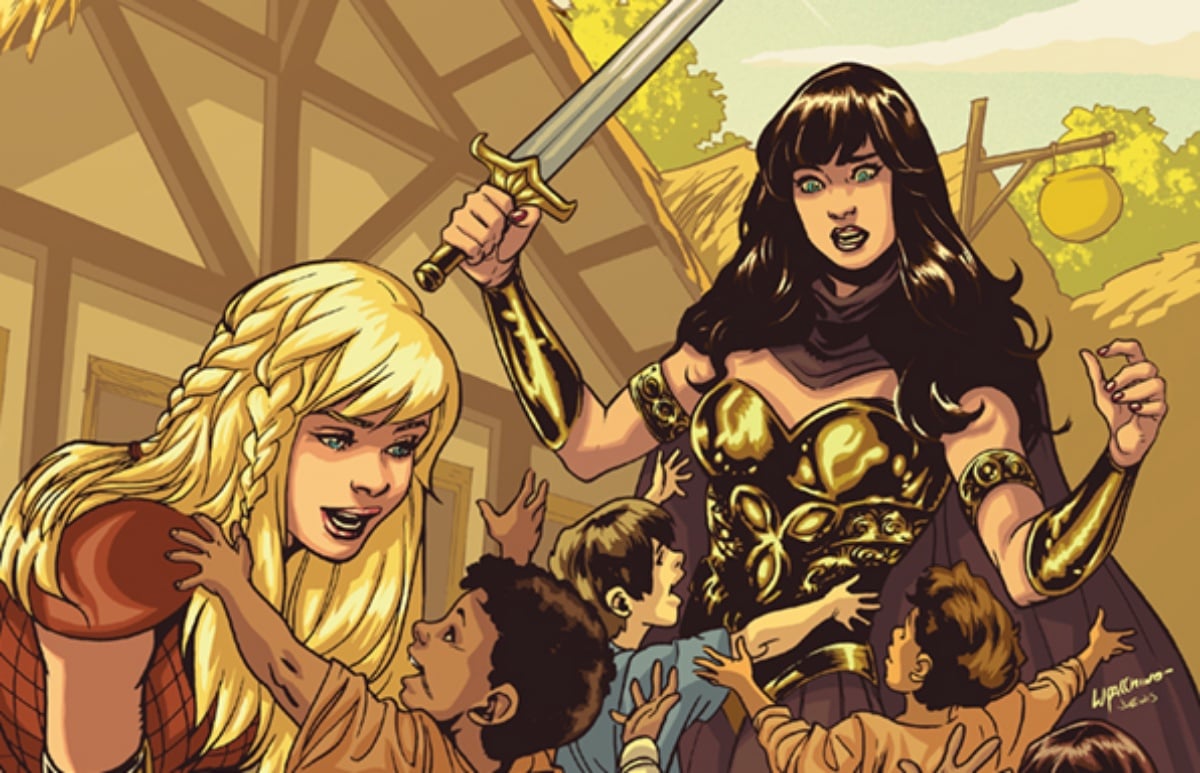 For many young women and queer kids around the globe, Xena was one of their awakening moments. Whether it was the relationship between Xena/Gabrielle or the sight of Lucy Lawless in all that leather, despite being off the air for almost twenty years, the fanbase it built is still as strong as ever, which is why seeing it continued once more in comic form is such an immense pleasure.

Dynamite Comics has brought back Xena: Warrior Princess, written by Vita Ayala (Chandra, Livewire), with art by Olympia Sweetman, colors by Rebecca Nalty, and letters by Ariana Maher, so it’s a ladies and non-binary team bringing this first issue together. In the issue, Xena and Gabrielle have been called to the village of Sideros because the goddess Discord (guess what she does) has threatened to pull a pied piper and steal the children of the village.

At the village, we discover that the children are abnormally strong, and that’s the result of a blood curse made between the villages and their patron goddess, Discord—not really the goddess you want to back considering what’s in the name, but you know … choices. I won’t spoil it for anyone, but Ayala does a great job of tapping into the fun dynamics of the show, and the art team manages to capture Xena’s power and the fact that she never skips leg day.

In addition to the story, the comic also builds on two of my favorite aspects of Xena: the diversity of the world and the intimate relationship between Xena and Gabrielle. Watching Xena now, one of the things I love is how they didn’t shy away from having non-white characters in the universe. Helen of Troy was a WOC. Marcus, one of Xena’s old flames and the only good dude on the show, was a Black man. So in the comic, we see kids and adults of multiple different skin tones all mixed together, and that feels like Xena.

We also get Xena and Gabrielle in bed together, holding and cuddling each other and sharing kisses. This isn’t abnormal for them. On the show, even before it started getting really heavy with the fan service, they were always under the stars hugging on each other, but now that we’re telling this story in 2019, it isn’t “subtext”; it’s just text of two women who are lovers and good friends, being together, talking about their adventures together.

If you love Xena, this is a fantastic beginning to this comic series, and we know that once Xena gets involved with the gods, there’s usually more going on that meets the eye. I’m glad to see Xena: Warrior Princess back, and I’m glad to see such a strong team of people being brought together to return this iconic, queer as Tartarus series to life.

There are several amazing covers, as well, but I found the above cover by Emanuela Lupacchino to really capture the way Xena and Gabrielle react to children.

What new comics are you checking out? Let us know below.