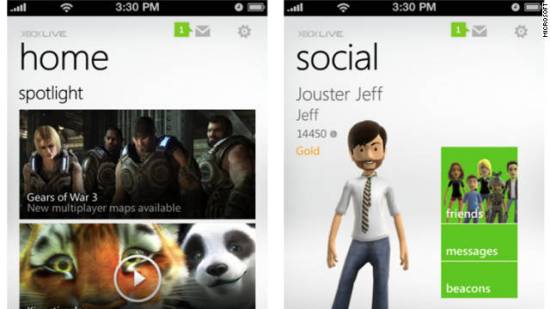 In a move to make Xbox Live a more useful and active social network outside of simply playing games with your buddies, Microsoft has released a new Xbox Live app. Of course, this app has been around on the Windows Phone for a while, but now Microsoft is aiming for a larger audience, and in doing so, creating some content for their chief rival: They’ve created an iOS app. The app is available for free and lets you do stuff like mess with your avatar, stare at your achievements, and chat with your Xbox Live friends.

It may seem like kind of a concession that Microsoft is making an app for iOS. You might be tempted to describe it as “breaking down” and making an app for iOS, but that’s not quite the case. Microsoft seems poised to use this as a marketing opportunity. All the users who download the app for Xbox Live-y purposes will also be treated to an in-app emulation of the Windows Phone interface. You know, just to check it out. After all, that’s where Windows 8 is heading so, hey, try it. You might like it.

In that light, it seems like this is a bit more calculated of a move on Microsoft’s part. Either way, more access to Xbox Live functionality, while not necessarily vital, sure ain’t bad. And I’d be down to check out the Windows Phone demo. In fact, I think I’m going to go do it now.