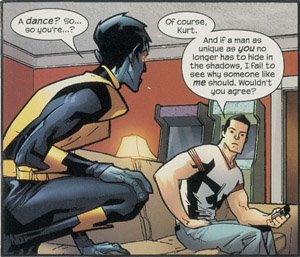 Sorry, fanficcers, he wasn’t talking about the tenderly presented friendship between Charles Xavier and Erik Lehnsherr. What we have here is a case of the internet bringing people together… even if those people are a random commenter and the screenwriter who can immediately and authoritatively tell them they’re wrong.

We begin with Alyssa Rosenberg’s essay for ThinkProgress.org, which was a lovely deconstruction of the ways in which X-Men: First Class continued the subtextual messages of all the good X-Men movies before it: Mutants as an allegory for the LGBTQ community.

And honestly, who could argue with that? Even Fox News commenters have figured out what all those pinko commies at Marvel have been trying to say with the X-Men for years. But the tl;dr argument is strong with those who object to the critical or textual deconstruction of so called “lowbrow” entertainment.

Stentz even stuck around long enough to give some recommendations:

The internet: bringing people together. For comic books.