Bryan Singer's X-Men Days of Future Past Will Be "Epic," Set in the '70s | The Mary Sue

Bryan Singer’s Promises for an “Epic” Days of Future Past Have Me a Little Worried. Plus, When Will This Movie Be Set Again? 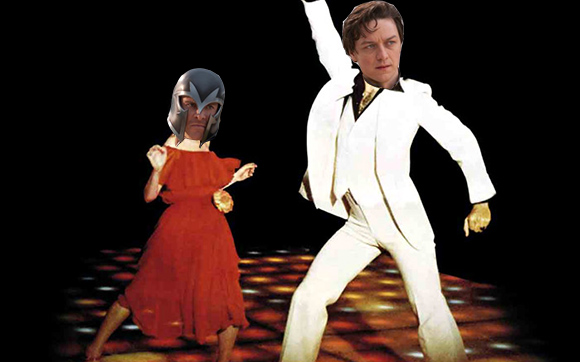 Oh, and regarding the movie’s rumored setting: Guess.

Said director Bryan Singer in a recent interview with Empire magazine, “It’s epic. I don’t think people realise how big this movie’s going to be,

“We get to bring both casts back together… I’m taking into account every movie – I’m not just grabbing my first two movies and First Class and smashing them together. I’m taking into account the entire universe as it’s been laid out so far on the screen, and really respecting it and trying to work with that. People took things in various directions, so there’s some clean-up. But ultimately I’m not just ignoring them either.”

That sounds all well and good in theory, but… does anyone else detect the seeds of a Spider-Man 3-level omnishambles of a movie? So far we have confirmed James McAvoy, Michael Fassbender, Jennifer Lawrence, Nicholas Hoult, Sirs Ian McKellen and Patrick Stewart, Ellen Page, Anna Paquin, Hugh Jackman, and Shawn Ashmore. Even if half of those are just cameos, that’s one overstuffed movie, and we’ve written before about how cramming in ALLLL THE CHARACTERS isn’t a good thing for the X-Franchise.

“We’ve cracked it in a way that it makes sense. I had a two-hour conversation with James Cameron about time travel, string theory, multiverses and all that. You have to create your rules and stick with them. That’s why Terminator and Back To The Future work so well. And there are certain mechanisms in X-Men, certain powers, perceptions and characters, that make this possible.”

Terminator and Back to the Future didn’t have a bajillion characters and an already super-complicated backstory, though. Still, the fact that he realizes the dangers of creating a nonsensical storyline, coupled with a statement in that same interview to the effect that he’s “distilling” a lot of what’s in the original Days of Future Past, leaves me a little hopeful.

A little. Some. If the movie turns out to be good, Singer, I will apologize to you.

What has me a more excited, though, is the rumor, courtesy of a screengrabbed casting call, that the movie will be set in 1973, approximately ten years after First Class. As ComicBookMovie points out, that likely nixes the Kennedy assassination as a plot point, but the possibility of seeing James McAvoy’s Charles Xavier wearing bad ’70s garb makes up for it. Corduroy and turtlenecks. You know he would.