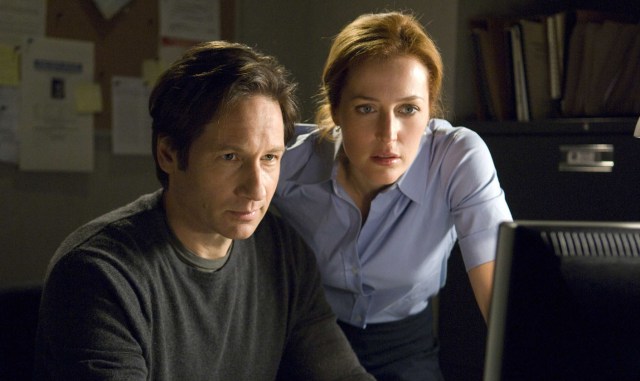 David Duchovny said this summer, in reference to his beloved-but-not-around-anymore series The X-Files, that “it’s not done until one of us dies.” Welp, Duchovny, neither you or Gillian Anderson are dead yet, so you’re not wrong. Especially now that Entertainment Weekly‘s confirmed that Fox is “seriously chasing” bringing back  The X-Files.

Fox chairman and CEOs Dana Walden and Gary Newman seem pretty invested in bringing more X-Files forth into the world. Here’s Newman confirming that they want it:

It’s true that we’ve had some conversations on X-Files. We’re hopeful of being able to bring that back at some point.

And Walden talking about that a bit more:

Gary and I both worked [at 20th Century Fox Television] through the entire run of The X Files. It was a great experience. We’ve maintained good relationships with Chris, David and Gillian. We’re very hopeful, but it’s hard. The actors are very busy. They have a lot going on. Chris has a lot on his plate, so it’s just trying to carve out the time.

No one’s brought X-Files back in any official capacity since the 2008 feature film, so the prospect of its return certainly brings up some questions, some concerns, and a whole lot of fannish emotion.

One thing to consider: They want Anderson and Duchovny back, but it should be noted that the former’s working on Hannibal currently and Duchovny’s about to head up the upcoming NBC series Aquarius. Scheduling’s sometimes the very worst part of trying to get something like this off the ground. Wet Hot American Summer succeeded in nailing down its alarmingly A-list cast, but we’re still waiting on that Dr. Horrible sequel. So which will X-Files be?

Until actual news of forward momentum pops up, we have Duchovny’s words to Rolling Stone from this past June:

Chris has got a new show. Gillian’s working. I’m working. It’s not impossible, but it’s not easy. And I never think it’s done. I’d say, it’s never done until one of us dies – until one of us three is gone. I would always want to do it. I wish we’d done more already. I wish the second one did better business. I think it did OK business, but not the kind of business where you get to do another one right away.

What are your emotions about all of this? TELL ME YOUR FEELINGS. TELL ME IF YOU BELIEEEVE.

*The title of this article used previously said that Fox was rebooting the series. I decided to change that.