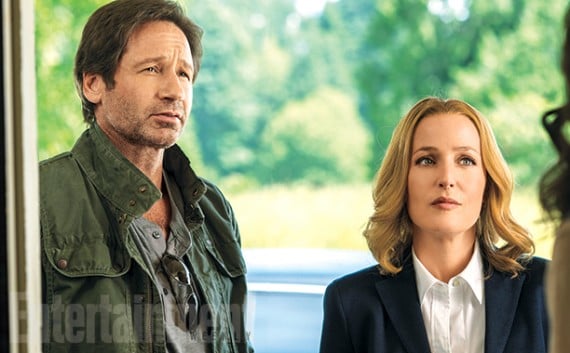 Thanks to VOD, the return of the X-Files last year was second only to Empire as the most-watched VOD program on FOX, and was one of the most-watched series on the network overall. Now, it seems that FOX is optimistic about a second miniseries for next year.

There have been twitterings about another installment as far back as the TCAs in January of this year, but the talk today seems to be more concrete. As reported by Deadline Hollywood, FOX TV Group chairmans Dana Walden and Gary Newman were more than hopeful about bringing Mulder and Scully back to the small screen. Said Walden at the FOX upfronts, ““We have had conversations with Chris Carter and David Duchovny and Gillian Anderson. I believe everyone is on board to do another installment of the show. [H]opefully this season we will be able to get it done and that the same time next year, we will have something to announce.”

Newman got more specific, saying that they’ve been talking to Duchovny and Anderson about “what kind of episodic order makes sense. Some of that is driven by schedules. Conversations are ongoing. I can tell you that all of them would like to do more of these, and certainly the network and studio want to do more.”

Honestly, I never tire of seeing Duchovny and Anderson together as Mulder and Scully. Yes, even I Want to Believe. So I’m all about another installment of the X-Files. What about you? What did you think about last year’s X-Files revival, and are you excited for another installment? Let’s talk X-Files below!