Christopher Columbus’ Santa Maria May Have Been Found, Is A Total Wreck 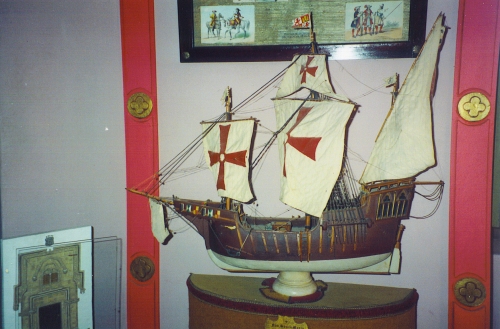 After five centuries hidden under the briny deep, substantial evidence shows that the elusive wreck of Columbus’ Santa Maria may finally have been found off the north coast of Haiti. I guess we need to update that poem now. What rhymes with “topographical evidence”?

Underwater archeologist/investigator and obvious bad-ass Barry Clifford believes he may have found one of the most historically significant marine discoveries ever, saying in The Independent:

The discovery of a possible resting site for the Santa Maria was made possible via topographic, archeological and historical evidence. Clifford targeted his hunt for the wreck based on a discovery in 2003 of Columbus’ nearby fort, geographical clues he gleaned from reading Columbus’ diary, and re-examination of photographic evidence the real-life Indiana Jones took in 2003 when he visited the site without realizing its possible significance.

The discovery of Columbus’ fort prompted Clifford to re-examine photographs from his initial visit and organize another dive earlier this month. The wreck’s size as well as surrounding currents and underwater conditions match records about the Santa Maria and its demise. Over the past years Clifford has also headed a comprehensive search of the waters off north Haiti where the ship went down. After using search divers, marine magnetometers, and sonar to investigate over 400 wreck sites, the archeologist is confident he’s finally found a match.

Since his first visit, robbers have already removed a canon from the ship. To preserve further losses Clifford is working with the Haitian government to move ahead with an excavation.

Ideally, if excavations go well and depending on the state of preservation of any buried timber, it may ultimately be possible to lift any surviving remains of the vessel, fully conserve them and then put them on permanent public exhibition in a museum in Haiti. I believe that, treated in this way, the wreck has the potential to play a major role in helping to further develop Haiti’s tourism industry in the future.

(via The Independent, image via Secret Tenerife)