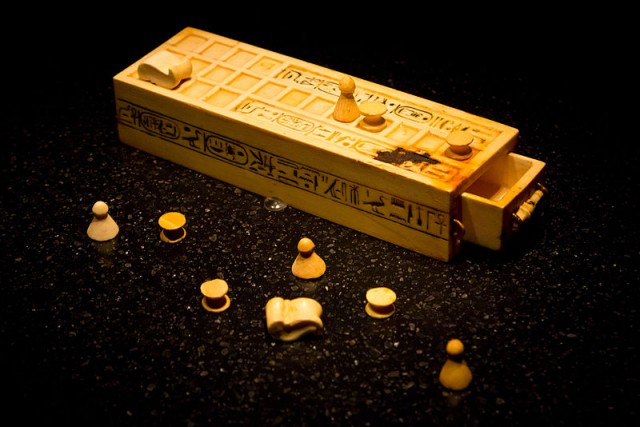 Pieces and box found in Tutankhamun’s tomb for the game Senet.

Archeologists have the coolest job pretty much ever. It’s not all accidentally bringing mummies back to life, fighting Nazis, or stopping evil cults, but even the real-life ones make really cool discoveries. Recently, a team of archaeologists found what they believe to be the world’s oldest game in a 5,000 year old Bronze Age burial site in Turkey.

Haluk Saglamtimur of Ege University has revealed that he and the team believe they have confirmed that board games originated and spread from Egypt and the Fertile Crescent. Isolated objects were found in Tell Brak and Jemdet Nasr, but as they were alone, they were thought to be counting stones. The find at Basur Hoyuk is the first complete cluster of pieces, ranging from animals to pyramids to dice and circular tokens.

And since apparently archeology just keeps getting cooler, the team’s next task became trying to figure out how the game was played, which, if it’s anything like most drinking games, involves a lot of guesswork and making things up while yelling– though I admit professionals might have a different approach. Saglamtimur says thus far they’ve determined that the number four seems to play an integral role, but that’s about all so far as the rules are concerned.

The burial itself tells a different story: the graves were replete with beads, pots, and metal artifacts in addition to the game, suggesting that the site was a burial place for the ruling class. Metal and ceramic artifacts, as well as diverse seals suggests a high level of trade with the neighbors of the region.

The graves uncovered at Basur Hoyuk ultimately revealed that despite culture clashes and increasing urbanization, there was a continuity in the settlements in their relationships with others and their own traditions.

Kind of makes you wonder what future archaeologists, whether human or alien, would be able to deduce or might entirely make up upon finding a pack of cards…

(via Discovery, image via Wikimedia)