The Force Is Strong In This One: World’s Ugliest Dog Is A Winner 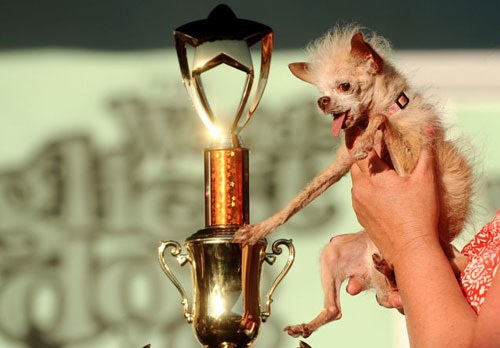 The true mark of a champion is being willing to revel in your achievement, even if it’s a title that others may not relish. Yoda, a 14-year-old Chinese Crested and Chihuahua mix, is a true champion. The dog was recently named World’s Ugliest at the 23rd annual contest at the Sonoma Martin Fair in Northern California. Like other Chinese Crested and Chihuahua mixes, Yoda sports an aesthetically unappealing look of short tufts of wispy hair, a protruding tongue, and long gangly hairless legs. While she might look more like a diseased albino rat than a dog, Yoda’s tale is an inspiring one of love and acceptance.

According to owner Terry Schumacher of Hanford, CA, Yoda has made tremendous progress since she was found abandoned behind an apartment building. Confused and turned off by the dog’s peculiar appearance at first, Schumacher adopted Yoda, and says the 2-pound dog is doing well. Yoda is not the first dog with Chinese Crested or Chihuahua ancestry to win the title of World’s Ugliest Dog. Last year’s winner was a one-eyed Chihuahua named Princess Abby, while a Chinese Crested took the trophy in 2008 and a Chinese Crested and Chihuahua mix like Yoda won top honors in 2007.