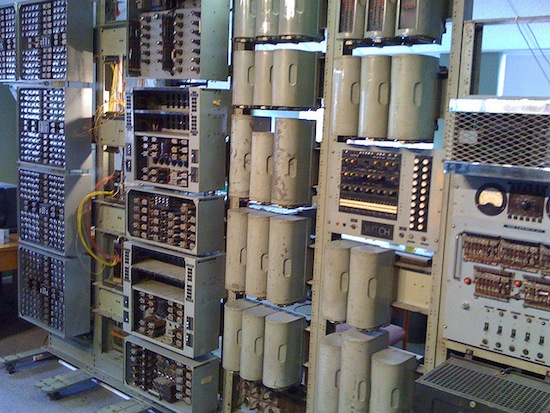 This should give typewriter-toting hipsters something to envy. Scientists in England have restored a computer built in 1951 to working order. The Harwell Dekatron, or Wolverhampton Instrument for Teaching Computation (WITCH) is now the oldest original working digital computer. That’s all really impressive, but does it run Tetris?

The project to restore the WITCH was done at the National Museum of Computing (TNMOC) at Bletchley Park in the UK, and has been going on since 2008. Originally, the computer was housed at the Harwell Atomic Energy Research Establishment where it performed menial computations from 1951 to 1957. Then it was moved to Wolverhampton and Staffordshire Technical College after they won a competition for coming up with the best educational use for the machine. The WITCH served as an educational tool at the college until 1973. After that it appeared briefly as a museum display, but was then packed up for storage where it remained until the museum uncovered it.

All that moving around couldn’t have been easy considering the WITCH weighs more than two and a half metric tons. That’s roughly what a car weighs. I have never appreciated my five pound laptop more than I do right now.

I recently took apart, cleaned, and reassembled an old Apple Power Mac G4 over the course of a few hours and felt pretty proud of myself, but the WITCH restoration has taken years. That might because it’s so enormous, but it is also comprised of 480 relays and 828 Dekatron valves, which have been hard to come by in the last few decades since the transistor made them essentially obsolete.

This video shows the WITCH being exhibited at England’s National Museum of Computing yesterday:

The WITCH will be on display at the National Museum of Computing next weekend, but here in the United States we’ll be happy with some more videos.

(via The National Museum of Computing, image via Kerry Buckley)