The Oatmeal Has Already Met the Tesla Museum Funding Goal 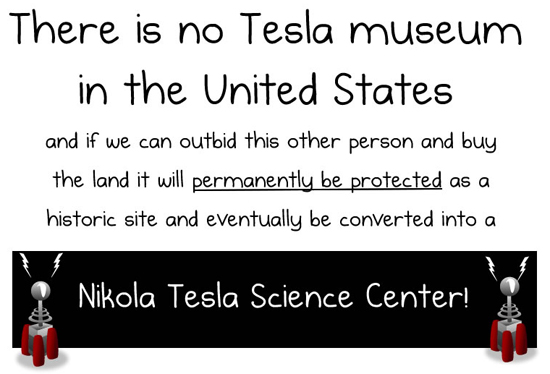 In what is obviously a sign of the power of the Internet, The Oatmeal‘s fundraiser to preserve the site of Nikola Tesla‘s last laboratory has already met its goal — less than a week after the fundraiser went live. As of writing, there are still 39 days left to help fund the construction of a museum on the site. That first $850,000 is just for the property, after all.

With over a month to go, chances are good that Matthew Inman, the man behind The Oatmeal, and the non-profit Tesla Science Center at Wardenclyffe will have far more money than they originally expected. Funding isn’t likely to stay consistent, however, as the goal has already been met and the project will soon go through the low middling point before the final drive. Even if it only trickles in from now on, everything extra is gravy.

With the matching grant from NY State, this puts us at $1.7 million raised in 6 days to try and buy the property.FAN-GODDAMN-TASTIC.

Nothing is final right now, but the money that has already been pledged is enough to give an offer on the land to preserve it as a historic site. Even if that’s accepted, they’ll still need to raise funds to build an actual museum, as the site needs restoration and cleanup. There’s still a long way to go.

For now, however, time to celebrate the fact that, yes, the Internet can be a benevolent force. We all knew it to be true, but our experiences on YouTube had made us cynical.

(Indiegogo via The Next Web, image via The Oatmeal)