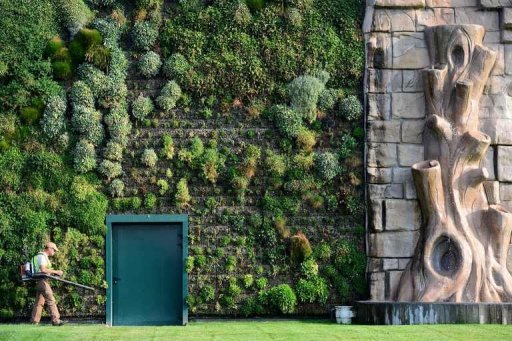 This week, a shopping mall in Rozzano, a town near Milan, Italy, was officially certified for having the world’s biggest vertical garden. Now, that doesn’t mean that roots of the flora in the garden are planted in the ground then rise up to record heights, but in this case, the plants are covering the shopping center’s walls, rising to the garden’s record height while living parallel to the ground.

Designed by architect Francesco Bollani and his team, the garden’s total 44,00 plants covers an enormous surface area of 13,600 square feet. Bollani said it took the team one year to grow all the plants, but only ninety days to build the facade, and likened the construction process to building with LEGO. Not only is the garden quite a sight, especially considering it composes the outside decor of a shopping center, but the director of the shopping center, Simone Rao, noted that the garden is also sustainable architecture. The interior of the shopping center is kept cooler than if there weren’t 44,000 plants adorning the walls, but the garden also helps save energy by reducing the amount of direct sunlight hitting the building. On top of that, plants are plants, and they reduce carbon dioxide, and covering the outside of a building with an extra layer of plant life reduces ambient noise inside the shopping center. 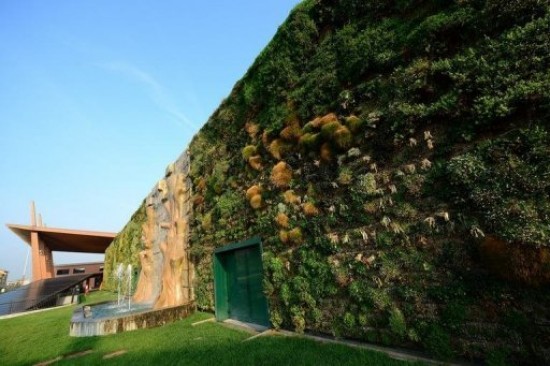 Bollani’s garden isn’t composed of walls slathered in soil with plants stuck in, but the structure is built with metallic containers that hold the plants. The containers actually add to the overall cost of the garden, hiking the price up to around $1.3 million.

Bollani’s garden claimed the record from the previous holder, a garden in Madrid that spans 844 square feet of the Hotel Mercure Santo Domingo. The Madrid garden sports over 2,500 plants — a far cry from Bollani’s 44,000 — growing up walls that flank a waterfall flowing down the center. 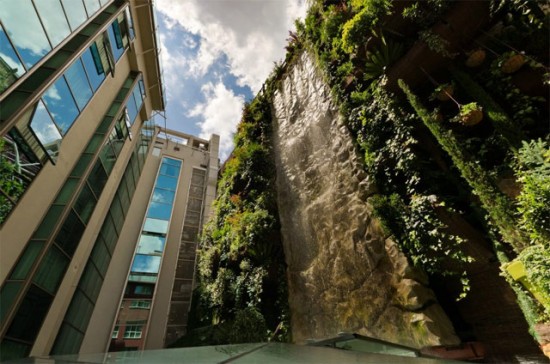 Interestingly, the Madrid garden was built in 2011 and certified as the record holder earlier in 2012; however, Bollani’s garden was actually completed in 2010, but somehow just got around to being certified this week. The Madrid garden probably doesn’t feel too badly for itself after quickly losing its world record; it just needs to take one look in a mirror to feel pretty satisfied. Both gardens are gorgeous, and makes me resent my window facing a brick wall and not being in optimal positioning for sunlight. Oh well, at least city life means there’s an alley full of garbage cans outside of my window instead of the proper factors to grow healthy plants in my room. That’s, uh, something?