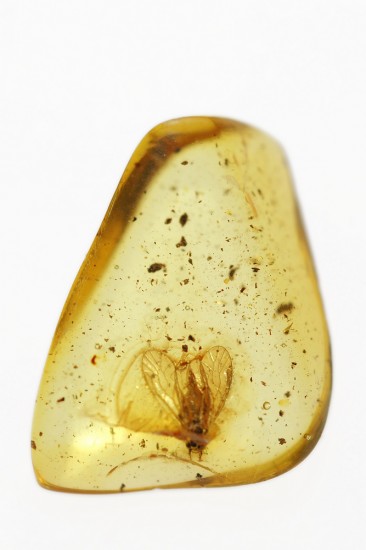 Interesting bugs found trapped in amber aren’t solely the realm of Jurassic Park; it happens in real life too. In this case, however, the imprisioned bug doesn’t contain dino DNA or anything so crazy but it does contain the oldest evidence of pollination ever found, dating back over a 100 million years.

The specimens in question are of a previously unknown genus Thrips and are covered in ancient pollen, presumably from a a gingko tree. Still completely encased in their amber prison, the bugs are currently being studied in detail by x-ray.

Flowering plants first evolved about 130 million years ago, so in the grand scheme of things, these specimens are from the “early” days of pollen in general. Still, close-up inspection via synchrotron X-ray tomography has revealed that the bugs are covered in many, thin hairs that seem very specially suited to carrying pollen around, suggesting that the ties that bind insects and flowering plants go very far back. How close to the origin of flowering plants they get, however, is something we’ll have a hard time figuring out unless we find another, older artifact.

“This is the oldest direct evidence for pollination, and the only one from the age of the dinosaurs,” Carmen Soriano, one of the researchers involved in the discovery, said in a release regarding the find. “The co-evolution of flowering plants and insects, thanks to pollination, is a great evolutionary success story.”

(via Discover Magazine, image via Shutterstock)