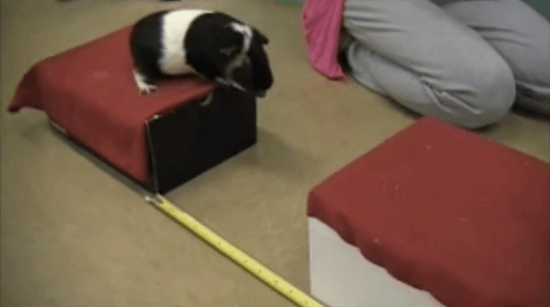 In a story which combines two things we love — cute animals and world records — comes news from Fife, Scotland that a new record for longest jump by a guinea pig has been set. Truffles, the leaping Cavia in question, jumped an astonishing 12 inches (30 cm) which is nearly 4 inches beyond the previous record. Truffles’ 13-year-old owner Chloe Macari lured the elongated rodent into the feat using his favorite food: Cucumber. See a video of the record-breaking feat, after the break.

The jump occurred on February 21st, and was accepted by the Guinness World Record judges. The impetuous for the attempt came when Macari noticed that not only did a record for longest jump by a guinea pig exist, but that it was rather short. Using shoe box platforms, she trained Truffles to jump further and further for bits of cucumber — a vigorous training regimen that paid off with a new world record.

It’s worth noting that a second jumping record for guinea pigs, one for height jumped, was set back in 2003 and is practically aching to be broken. Perhaps Truffles will soon be going onward and upward.

(via Blame it on the Voices, BBC)