The World’s Biggest PAC-MAN website is operating under a fairly descriptive moniker. It allows people to play what can only possibly be described as, you guessed it, the world’s largest game of Pac-Man. As we often find with neat browser games, web design team Soap Creative used HTML5 to get World’s Biggest PAC-MAN up and running. The game connects user-created Pac-Man levels–ranging anywhere from ridiculously easy, to extravagantly difficult, to the obligatory genitalia-themed mazes–and allows users to dump all of their workday productivity into a Pac-Man world so large that it requires a world map.

In the name of journalism, I played a few maps to get a feel for the game, as well as to get a hilarious screenshot: 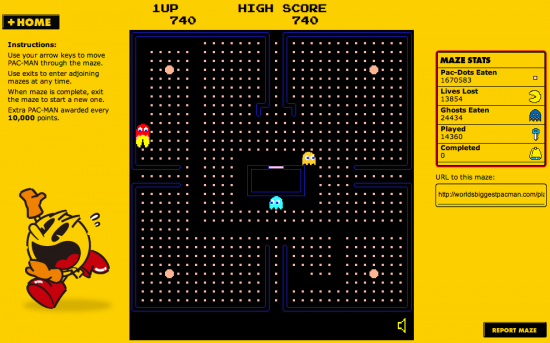 The game plays like one would expect, with ghostly death and the eating of nondescript pellets; surely not an act aimed at influencing a younger players. Logging in with Facebook Connect allows one to create levels and throw them into the humongous Pac-Map, and the game keeps track of overall stats, including which maps players have previously tried out, personal lifetime stats, individual maze stats (how many pellets and ghosts eaten, how many times played, etc.), as well as rankings based on country; making it more addictive than it should be. If you ever wondered what a Pac-Man MMO would be like, World’s Biggest PAC-MAN is the closest thing to satiating that curiosity.