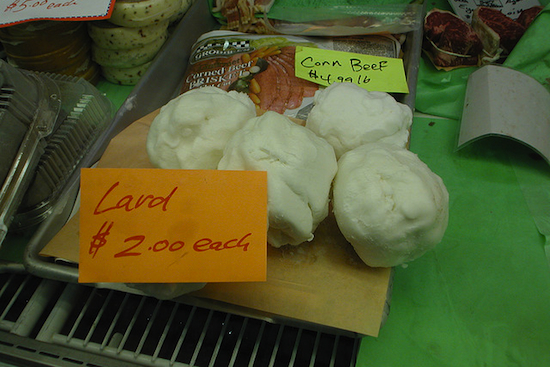 Plenty of strange and wondrous wash up on the beach every now and then: Shells, pieces of coral, dead and largely indeterminate ocean life that news networks and “experts” are quick to label as a sea monster. The usual stuff, but staff members at the St. Cyrus nature reserve in Angus, Scotland were surprised to find white, barnacle-encrusted blobs of lard washed ashore a nearby beach after a storm had hit the coast. Fortunately, the lard is believed to have originated from the wreck of a sunken WWII-era merchant vessel and not the leftover medical waste from Poseidon’s regular liposuction procedures.

St. Cyrus’ reserve manager, Therese Alampo, said that the depth of the swells from the storm were likely strong enough to tear away at the wreck in question, causing the lard to drift out of the cargo hold and toward the beach. Despite having been submerged for over 70 years, Alampo commented on the lard’s smell, saying that despite its unappetizing appearance, some parts were still white and even smelled fresh enough to use. Yum.

Though wayward lard ending up on the sand can certainly be classified as a strange occurrence, it wasn’t entirely uncommon for those growing up in Britain during WWII. One local resident and retired fisherman, Angus McHardy, said that Nazi attacks on merchant vessels were a regular occurrence, with the cargo almost always finding its way back to shore, and during a time when the people were experiencing country-wide food rationing, getting one’s hands on a barrel or glob of lard was quite the find.

Assuming that there’s still lard stored in the sunken vessel, it makes us wonder if there are schools of morbidly obese fish and other chubby marine life swimming close to the wreck.