LEGO Robot Alligator Scares Rats in the Name of Science 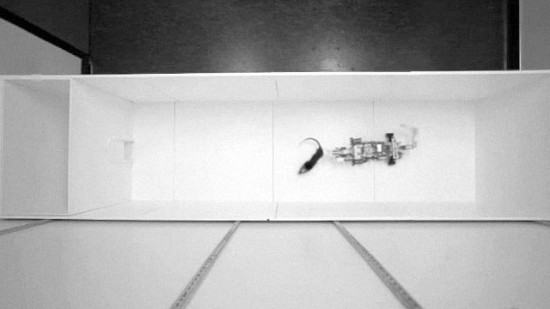 In the name of studying “natural” fear, scientists built a LEGO Mindstorms robot, dubbed Robogator, complete with eyes, a moving mouth and a lunging motion function, which they unleashed upon lab rats in an attempt to see how the rats react to the scary fake predator.

Throughout the five or so days prior to unleashing Robogator, the scientists made the rats acclimate to their new testing environment, which consisted of letting them use a nest in the corner. The scientists then placed food pellets certain distances from the nest, training the rats to recognize the uninterrupted food source. After the rats acclimated to the free food, the scientists unleashed Robogator, which “attacked” the rats each time the rats went near it, causing the rats to flee back to their nests and freeze. The attacks resulted in the rats only venturing out and claiming the food pellets that weren’t near Robogator.

So, the rats are scared of being eaten by a mechanical alligator. Yay, science? Well, it turns out the researchers hypothesized that the amygdala was responsible for the fear-related change in behavior, so they altered the activity of the rats’ amygdalae, and found that the rats weren’t afraid of Robogator anymore.

The scientists still aren’t sure what actually helps the rats weigh one motivation versus another, which in this case, is the choice between obtaining food or being terrorized by mechanical jaws. Either way, we now know what part of the rat changes their behavior when they’re terrified.