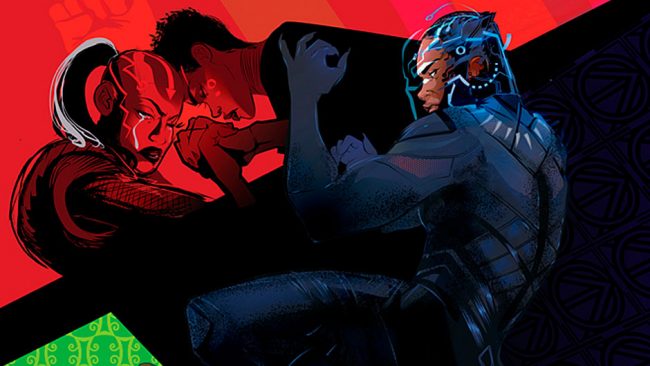 Shortly after Black Panther and the Crew got the cancellation order from Marvel, another Black Panther-centric comic gets dropped. Writer Roxane Gay confirmed on Twitter yesterday that Marvel cancelled World of Wakanda, the title on which she had been working for some time. Though the comics company hasn’t offered any sort of explanation, it’s pretty easy to draw a line from this cancellation to Marvel’s fairly recent knock against “diverse titles.”

Sadly, the series was cancelled but I hope to revisit the characters. https://t.co/7kieeBWdQy

Previously, Marvel VP David Gabriel said that “people didn’t want any more diversity. They didn’t want female characters out there. That’s what we heard, whether we believe that or not. I don’t know that that’s really true, but that’s what we saw in sales.” Ta-Nehisi Coates, who co-wrote Black Panther and the Crew with poet Yona Harvey, said that poor sales were to blame for the cancellation of their title, which happened only two issues into the series’ debut. They’ll get a chance to wrap their story and everything, but that’s it for that title, unfortunately.

It’s super super disappointing to see Black Panther and Wakanda getting cancelled on the comics side of things while the hype for the movie seems to just be warming up. After all, the first trailer for Black Panther dropped just three days ago on the 10th. We’ve still got about eight months until the movie comes out (next Feburary), but truth be told, now is the time to be building hype for it all over the place. It would be a downright disappointing shame to see Black Panther go the way of Wonder Woman in terms of pre-release hype and advertising.

As an aside, it’s very much worth mentioning that it’s likely not diversity that killed Marvel’s sales, but rather the entire comics industry’s archaic publishing methods. As Cindy Marie Jenkins wrote for us back at the end of May, the comics industry’s publishing schedules can be a bit hard to decipher for newcomers and even returning veterans. Many folks tend to wait for trades to pick up new titles rather than try to navigate their way around hiatuses, countless reboots, and spotty production schedules. As well, this tendency to wait until one can read an entire arc or “season” can also be a reflection of our new Netflix-fueled multi-episode television watching habits.

If and when Black Panther and the Crew ever gets released to a trade, we can likely compare just how the sales are and where the interest really lies. It’s not an exact apples-to-apples comparison, but it’s something to look out for, and this growing interest in “trade-first” consumption is certainly something that the comics industry needs to take to heart. If one wishes to keep the new readers brought on by these diverse titles, it’s important to consider not only the whys but the wherefores of their comic consumption. The faces of comics readers are changing—wouldn’t it follow that their habits would do the same as well?