World of Goo Coming to iPad 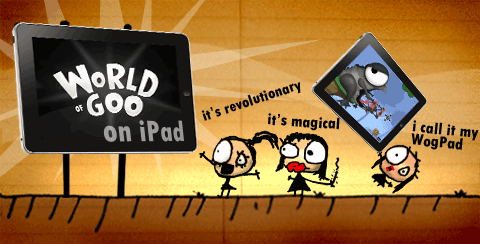 World of Goo, the wildly and deservedly popular goo-centric puzzle game by developer 2D Boy, is headed to Apple’s iPad once Apple approves the game, which 2D Boy hopes is before the holiday season. Almost as importantly, in a 2D Boy FAQ, they let us know that referring to our iPads as WogPads once we get World of Goo installed is a solid plan.

As for an “iPhone, iTouch, iEtc.” release:

Maybe. There’s a lot of iGoo to pour in, and we don’t want to release something if it doesn’t run absolutely buttery smooth.

World of Goo, released on the Nintendo Wii, PC, Mac and Linux in 2008, is a game in which adorable little sentient balls of goo are being harvested by the World of Goo Corporation for uses in various products, such as using them for beverage ingredients or as makeup test subjects. The player uses a variety of goo balls to build bridges toward pipes, which then suck up the sentient goo.

The prospect of a portable, touchscreen World of Goo is very exciting, as the game fits into the portable/touchscreen category perfectly, and would probably be the category’s shining example of gaming.