It’s World Backup Day. Is Your Data Backed Up? 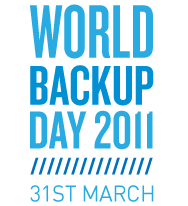 Here’s a new holiday we can get behind: As a protective measure against April Fools’ Day pranks gone awry and as a matter of generally good computer hygiene, March 31st has been decreed World Backup Day by Redditors and the women, men, and narwhals that love them. Regularly backing up data may be common practice for some tech-minded individuals, but for many laptop-toting civilians, it isn’t — and the results can be disastrous. At some point, you or someone you know has probably experienced the pain of a term paper gobbled up by corrupted data, and it’s alarmingly common for an entire hard drive to fail.

As World Backup Day’s organizers point out, the hard drive is the component of the computer most likely to break unexpectedly: Brand new hard drives fail at a rate of three percent per year, and it only gets worse as time goes on. And this is to say nothing of users’ potential to accidentally inflict harm on their own data with viruses and malware.

What to do? External drives, USB sticks, DVDs, and Blu-ray discs offer relatively painless IRL data backup, and online backup on the cloud may be even cheaper and more secure. More info about the pros and cons of each method on the World Backup Day website.