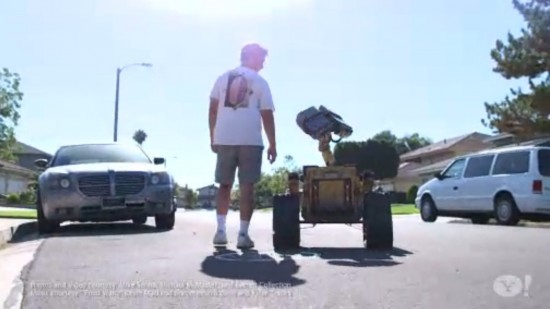 Prop maker and hobbyist Mike Senna has been working on a remote-controlled, life-size replica of Disney-Pixar‘s WALL-E since 2010. Now, his work is complete, and we get to see WALL-E roam the Earth he never knew. Directive: Make children happy.

Senna had previously built an R2-D2 replica in 2003, and took it to events organized by City of Hope. Watching the effect it had on the children inspired him to build a robot that had “more emotion.” Thus began his 2-year effort of bringing WALL-E to life.

Senna funded the project himself, and estimates he spent about 3,200 to 3,800 hours building WALL-E from scratch. He was giving it all his free time, averaging 25 hours a week on the project while working as a computer programmer.

He had nothing to work on but the movie — no schematics, no pre-existing models, no prototypes. He watched the movie over and over again to get everything right, from the movement to the weathered paint job to the Buy and Large logo on the back. He developed the electronics and the movement mechanisms all by himself, and did an amazing job. Senna has chronicled his time building WALL-E on his blog, Adventures With WALL-E, and will now be updating it with the awesome time they spend together making the world a happier place.

This video is an interview he did with The Yo Show.

He gets to say “I built WALL-E”! Also, that was the most impressive shrug I have ever seen.

If you ever get to meet WALL-E, make sure you have a laser pointer on you. I’m sure he’ll appreciate a little game of chase.

(Adventures with WALL-E via blastr)