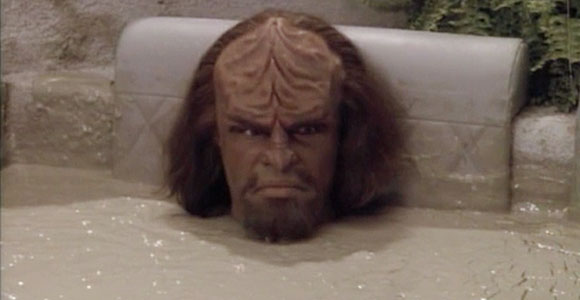 I don’t know about you but Worf was one of the best characters to come out of Star Trek: The Next Generation. I was glad he continued on to Deep Space Nine but since the TNG films wrapped, there’s some serious Woft withdrawal on my part. That’s why I’m so excited actor Michael Dorn is trying to figure out if he can get the green light for his own spin-off! Read on for some details.

Now, Dorn is already busy doing a Kickstarter for a romantic comedy filled with Star Trek actors but this is something else entirely. He says the “response has been pretty amazing” to a Worf movie.

“We’ve been contacted by different individuals-I can’t say who and all that-about wanting to come on board and be part of this,” he said. “Also, there’s all the political stuff going on with the new movies, with J.J. Abrams and Paramount and all that stuff, which I have no clue about and what it all entails, but that’s where it is right now.”

Dorn says the film would focus on post-TNG Worf as the Captain of a Federation ship and would definitely have a darker tone than the series.

“Interestingly enough it has gotten traction. I was very surprised, I was on a movie not too long ago, where one of the producers was basically lobbying to be part of it,” said Dorn. “Like I said, in this business you never know and I’ve been through pitching things and I never want to do that again [laughs]. It’s pretty brutal, but definitely I think once again, if Paramount or CBS or anybody thinks this is a viable thing, they’ll jump on it.”

Besides a Worf movie, would the actor consider a cameo on the Big Bang Theory like several of his fellow cast members who have already appeared? “That’s a long shot I think. Not so much about the process, but you’re pushing the envelope by putting the Worf makeup on and going on another show in another genre, you’re asking for trouble,” he said. “Even in a dream sequence its one of those things where if you did that, I think you’re driving the stake into his heart at that point-not into his heart, but into the character’s heart.”

Would you like to see Worf get his own movie?