Once Upon A Time In Wonderland’s Alice Will Kick Ass (Sweet!) 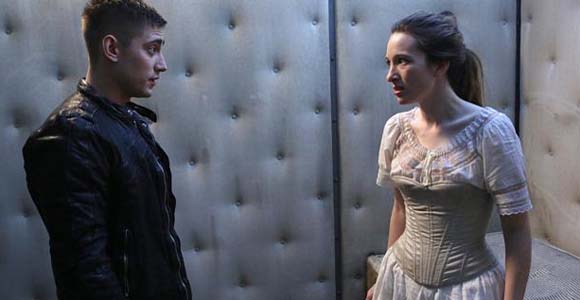 Granted, we’ve already seen ABC’s Alice, Sophie Lowe, get into some adventuring in the Wonderland trailer but it’s nice to hear it straight from the horses mouth. Or rabbit, as the case may be.

At the Television Critics Association tour this week, executive producers Edward Kitsis, Adam Horowitz and Zack Estrin spoke about their approach to the classic tale. “We’ll be going into Wonderland,” Kitsis said of the premiere episode. “We’ll get a sense of the world with Alice’s return and meet Jaffar and the Red Queen.”

Fans can also expect to see The White Rabbit, played by John Lithgow, and the Knave of Hearts, played by Being Human’s Michael Socha. But how does Aladdin’s Jaffar fit in? Well, they’re mixing the two stories together. In Wonderland, our Alice has fallen in love with a genie and she’s on a quest to save him. According to IGN’s report:

“We never wanted her to be a damsel in distress,” Kitsis said when asked how they had conceived of their version of the iconic Alice. “We wanted her to go down that rabbit hole, sword in hand, and find her man.” In his address to the press, Lee promised that this would be a very “kick-ass” version of the character. Lowe agrees that she is “tough, and both mentally and physically strong.”

And for anyone worried about Sebastian Stan getting recast as the Mad Hatter, don’t. Deadline writes, “[Horowitz] ‘We would move heaven and earth to have him come back on either show, but he’s doing Captain America now … he has an open door.’ The producer added that whether or not Stan becomes available in the future: We are never going to have a Mad Hatter who is NOT played by Sebastian.”