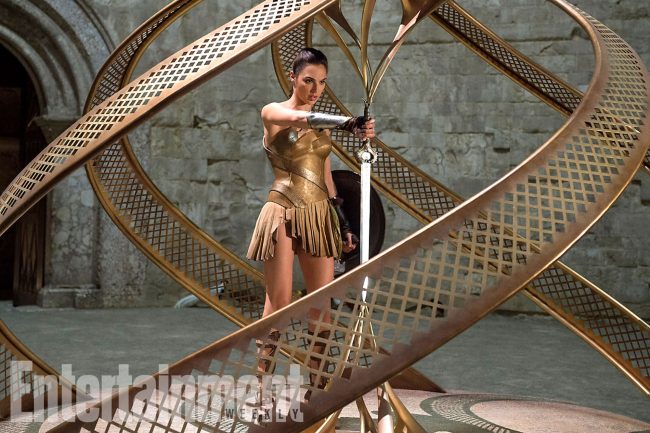 The turning point in Wonder Woman’s origin story is when she decides to go against her mother Hippolyta’s wishes and leave Themiscyra. In an image released by Warner Bros. Pictures and DC Entertainment exclusively to Entertainment Weekly, we see that moment captured in gold.

Gal Gadot, looking stunning and powerful in gold, stands above the Amazons’ mythical “god killer” sword having broken into the heavily-guarded Amazon armory to steal it, before going to “Man’s World” to help save humanity during World War I. We saw a glimpse of this in the most recent Wonder Woman trailer, but seeing this still image really captures the decisiveness of this moment, as well as the details of her amazing costume.

According to Entertainment Weekly, director Patty Jenkins says, “This is her moment. She’s heard all the terrible things about man’s land. But she’s also heard that mankind is in need and under duress. This is her great moment to make the decision to be the one to try and save them.”

I can’t believe we still have so much time to wait until Wonder Woman‘s release this summer! What are you most excited to see in the upcoming film?