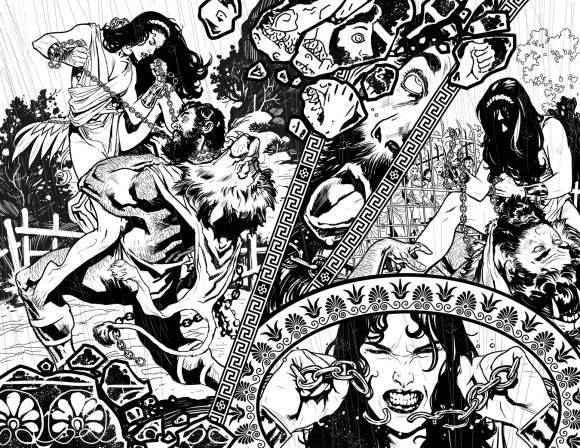 DC’s Earth One series (which they’ve done for Batman and Superman) so far, are non-canonical retellings of the origin stories of DC’s biggest characters. And when I say retellings, I mean Superman in a hoodie and Batman without his limitless fortune, you know, the kind of rebootings that try to tell a different kind of story with a familiar character. Not having read Superman: Earth One or Batman: Earth One, I couldn’t tell you how successful they wound up being, and some of the things Grant Morrison‘s said about his Wonder Woman: Earth One haven’t impressed (nor have they definitively condemned in my opinion), but I’ll say this for the guy: he knows how to write superheroes as gods. There could be worse places to start presenting the book to me than with art from Yanick Paquette of (likely) Queen Hippolyta going to town on Hercules.