Wonder Woman Gets a Tumblr Diary, Batman is a Big Fat Jerk 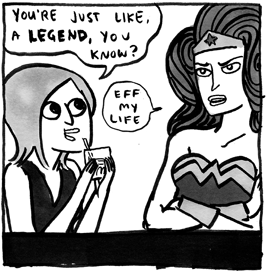 Reported for duty in full pants as could not find star-spangled bottoms while tearing through apartment. Was written up by Batman (obviously) for N-52 Dress Code Violation and CCA-54 Intoxicated While On Duty. Placed on surveillance for next two weeks as punishment – v. bad. — Diana Prince’s Diary

The tumblr Diana Prince’s Diary only has two posts right now, but we’re pretty enchanted by them. Also, they have Batman being a total passive agressive jerk, which is probably my second favorite characterization of Batman of all time. Enjoy this single panel from an entire page of Kate Beaton Wonder Woman comics, which serves as the perfect visual accompaniment to the blog so far.