U.S. Women’s Soccer In Danger Of Losing Its Professional Status 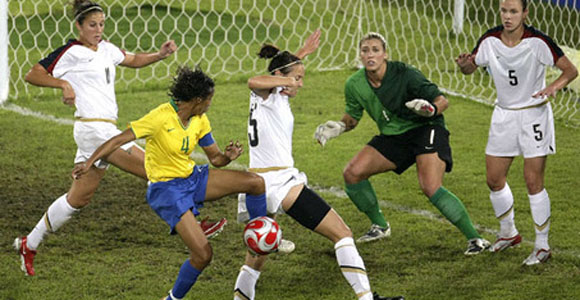 Women’s Professional Soccer may lose its status as a professional league after the size of said league went from six teams to five. US Soccer, the sport’s governing body in the United States, have a rule that says professional leagues are required to have a minimum of eight teams but they aren’t letting that stop them. Read the story and find out how you can help.

The league officially began in 2009 with seven teams and the New York Times cites the recent loss of the Florida based magicJack team as the source of the current problems. “With only six (all in the eastern part of the country) in 2011, W.P.S. requested and was granted a one-year waiver by the federation’s board of directors,” writes NYT. “Now with only five teams a certainty for the 2012 season, W.P.S. requested an extension of the waver to take it through a season that will include the London Olympics in the hope of attracting new investors before 2013.”

“Our primary goal is to retain our [Division 1] status. We just came off a phenomenal season in 2011 and it feels like this is our time,” said Jennifer O’Sullivan, the league’s commissioner. “We are determined to provide the platform for the development of the next generation of national team players. There’s too much here to walk away from. But for an additional team, we are in a time crunch and we don’t want to rush into anything.”

In 1999, the Women’s United Soccer Association was the first attempt at creating a professional women’s league but it only lasted until 2003. US Soccer has now given the league 15 days to find a sixth team but Women’s Professional Soccer are asking them to extend that deadline further.

“It’s partly because of the W.U.S.A. and now W.P.S. that we won gold in 2008 and silver at the World Cup,” said Jennifer Hitchon, the executive director of the union that represents the league’s players. “The league is fragile and fraught with problems, but it’s ours and the federation will be hard-pressed to effectively shut down the last best chance for a women’s pro soccer league in this country.”

They are trying their best to make sure that shut down never happens. “We have a group of dedicated owners who want to make sure the league survives in an incredibly challenging economic environment and we need help in building the sport,” said Jack Cummings, one of the league’s founders. “There was a great passionate response from the American public as a result of the World Cup. We have another event next summer with the Olympics. US Soccer is either being bureaucratically pedantic saying we need at least six teams or it’s pushing the league into the grave.”

There are a few possible teams that might be able to help. Cummings mentioned investors in Los Angeles are interested in relaunching the Sol and “that several clubs that also field teams in Major League Soccer, the men’s league, are keen to launch W.P.S. teams in the Pacific Northwest. In addition, ESPN has plans to launch a sports channel aimed a women that could be a natural home for W.P.S. games.”

I have seen families gathered around the U.S. women’s national team training field in Scottsdale, Ariz., eagerly hoping to get an autograph. I’ve seen girls screaming as if they were at a Backstreet Boys concert for the chance to meet Abby Wambach or Alex Morgan. I’ve seen Hope Solo, on “Dancing With the Stars,” transcend her role as an athlete and become a celebrity. I’ve seen fans jumping up and down, almost at the point of tears, because I gave them my used, sweaty shinguards after the W.P.S. final this past season. These things tell me that there is hope, and a lot of it.

If you would like to help, Averbuch’s teammate Alexandra Sahlen has created an online petition saying, “The opportunity for the millions of young girls that dream of being the next Hope Solo or Alex Morgan will never get the chance. All because US Soccer did not back the league that is playing in their back yard. That is producing and bettering their players for not just today, but for the future.”