“Women Of All Ages Have Flat Out Rejected” John Carter 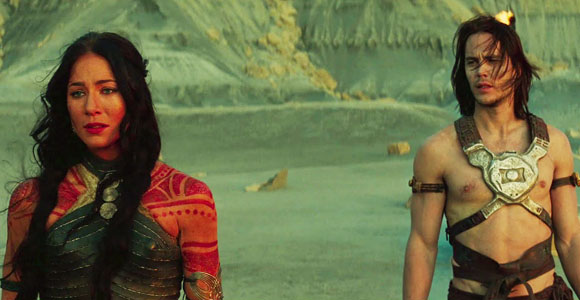 Sounds like a reality dating show review but no, this is about a movie. Walt Disney Studio changed the name of their next epic to John Carter because they were worried men wouldn’t see a movie with the word “Princess” in the title and that women wouldn’t see a movie with “Mars” in the title. Well guess what? They don’t have to worry at all anymore. No one is going to see their movie. At least according to new tracking numbers leaked today.

Disney executives are scrambling this afternoon after hearing the early tracking news for John Carter. According to sources Deadline spoke to, the news is “not good.” They cite, “2 unaided, 53 aware, 27 definitely interested, 3 first choice.” But the more interesting quote from the story? “Women of all ages have flat out rejected the film.”

Writer/director Andrew Stanton previously discussed the thinking behind the name change (The Title of John Carter And Why It Has Everything To Do With Gender And Money In Hollywood). “Here’s the real truth of it, I’d already changed it from A Princess Of Mars to John Carter Of Mars. I don’t like to get fixated on it, but I changed Princess Of Mars…because not a single boy would go,” he said. “And then the other truth is, no girl would go to see John Carter Of Mars. So I said, ‘I don’t won’t to do anything out of fear, I hate doing things out of fear, but I can’t ignore that truth.'”

Barring Stanton being completely wrong in the opinion that girls wouldn’t go see a film that took place on Mars, his (and presumably the studio’s) presumptions are going to cost them big. “The tracking for John Carter is shocking for a film that cost over $250 million. This could be the biggest writeoff of all time.” reports Deadline who have heard that the film might only make an estimated $100 million.

A Disney rep was quoted as saying, “It’s the last leftover from the previous regime of Dick Cook,” an executive who works for successor Rich Ross tells Deadline. “We’re not running away from the movie. Our job is to sell it.”

I’m gonna go out on a limb and say you already lost the “selling it” war back when you altered the name. For those who aren’t familiar, John Carter is based on the first in Edgar Rice Burroughs’ Barsoom series called A Princess of Mars. A possible reason no one wants to see the film? Susana weighs in, “It’s because it has the title of hartwarming oscar bait about a homeless veteran. Not the title of a family action movie.”

She’s right and so are all the other’s who’ve said it. They took away everything from the title that made the film unique and appealing. Obviously there are other factors at work, the previews may just not look good to viewers, etc., but it’s a shame either way.