Blast From the Past: When Cosmo Wrote Articles Convincing Women To Be Programmers 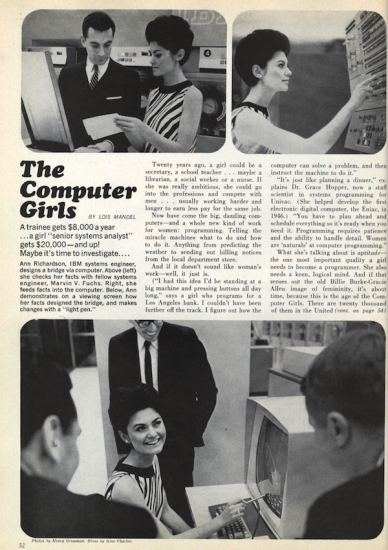 Join us as we travel back to a time when misconceptions about there being only certain kinds of work that could be efficiently performed by the female intellect (woman’s work, now there’s a concept I’d like to give a good swift punch in the head) and misconceptions about whether programming was a highly technical, creative, and demanding job… or basically a slightly more complicated stenography position.

Women were way more involved in the early days of coding (and code breaking) than we often hear about. Bletchley Park, for example, the UK’s center of codebreaking in World War II, had a staff that was 80% women “calculators,” that is, the ladies that did all the tedious math because we hadn’t invented machines to do it for us… Yet, because Bletchley park also produced Colossus, the world’s first programmable digital electronic computer, whose units were operated mainly by members of the Women’s Royal Navy Service.

So yes, as this article from a 1967 issue of Cosmopolitan tells you…

Women, with their eternal patience and attention to detail, are perfectly suited for the job of programmer that we don’t want to do! Why, it’s just like planning dinner, because you can have a career, ladies, but you shouldn’t forget that no one will marry you if you can’t be a housewife, too.

And if it doesn’t sound like woman’s work? Well, it just is.