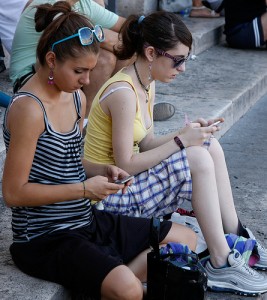 We’re generally wary of statistics that claim that women comprise 50% of online gaming, or that play up the fact that more women play mobile and social games than men do.  After all, those statistics may be true, but they carry very little weight with the hardcore gaming community because those games are not “hardcore.”

And personally, we agree.  Fruit Ninja is not hardcore.  But! The people who play Fruit Ninja, or Farmville, or Angry Birds are gamers, whether or not they identify that way.  They play games.  They spend money on the games industry.  They don’t whine about the hardcore/causal dichotomy or complain about DRM or participate in console war bickering, so is it any wonder that the games industry is slowly learning to cater to them?

According to The Street, more than half of mobile gamers are women, and not only that, they spend more time playing their mobile games than watching prime time TV.

Also there was this tidbit:

Mobile gamers tend to be younger, more educated and more affluent when compared to their hardcore male counterparts.

I’m not sure whether I’m smug or sad about that.

So yeah, we have difficulty summoning enthusiasm for the news that lots of women play casual games, because it doesn’t get women any more cred with the hardcore gamer community, who are the people we most want to realize that there are women among them and they deserve equal treatment.  But the hardcore community really should care about the growing popularity of casual gaming precisely because it will eventually have an impact on their hobby.

When bigger game makers see the kind of profit they can make on a tap and swipe based mobile game, they’re going to want to get in on that.  Nintendo is already carving out its niche in the casual market.  And this could mean one of a couple things: less of a focus on hardcore content that appeals to a smaller market, or, increased revenue from simpler to make casual games allowing more money to go towards producing the big budget high-rez teh hardcorez games that gamers know and love.

In either case: something to pay attention to.