As China’s First Woman Sits In Space, Sally Ride Celebrates The 29th Anniversary Of Her Mission 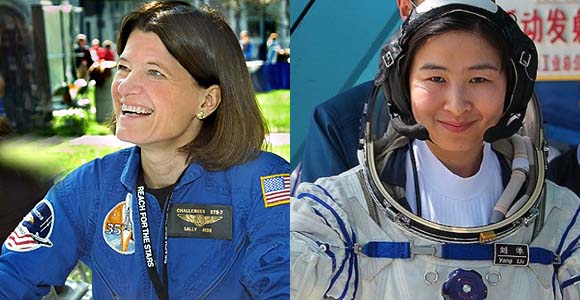 We were thrilled to bring you the news last week that China had chosen Liu Yang as their first woman astronaut. Read on for details about the launch, which coincidentally enough, happened very close to the anniversary of trail blazer Sally Ride’s first space mission.

Yang was one of two women being considered for China’s latest mission, Wang Yaping was the other. On Saturday, Yang joined Liu Wang and commander Jing Haipeng aboard the Shenzhou 9 craft as the final picks.

The 33-year-old female fighter pilot is currently at the beginning of a 13-day mission with the aim of docking at the Tiangong 1 module.

“State television devoted live coverage to the launch, which was initiated in the Gobi Desert at the Jiuquan Satellite Launch Centre,” according to Metro. “It marks the fourth manned mission in the nine years since Yang Liwei’s maiden voyage announced China’s presence on the international space stage, with the economic superpower’s emergence recalling the famous space race between the USSR and the USA in the twentieth century.

It’s a big step for China to be sure, but not the world. Valentina Tereshkova, the very first woman in space, recently turned 75. The Russian mission took her to space in 1963 and twenty years later, in 1983, American Sally Ride went down in history books.

Ride eventually found herself aboard the Space Shuttle Challenger after responding to an ad in a newspaper from NASA. On June 18, 1983 she became not just the first woman from the U.S. but also the youngest American ever in space.

“Ride has written five science books for children and started Sally Ride Science in 2001, which creates entertaining science programs for elementary and middle school students,” according to the NY Daily News. “Her legacy is plain in how little fuss was made when NASA astronaut Catherine Coleman spent 159 days at the International Space Station last year. The relatively unknown Coleman is the latest of 48 American women to leave earth’s atmosphere and reach for the stars.”

But in 1983, it was a huge deal. While Ride was busy training, the nation was immersed in her story.

“I don’t think I appreciated how much of a trailblazer I was for women and how much women would look up to me as a role model and the things that I had done until after my first flight, after I landed,” she said. “I wasn’t face to face with women until I came back from my flight, and then it hit home pretty hard how important it was to an awful lot of women in the country.”