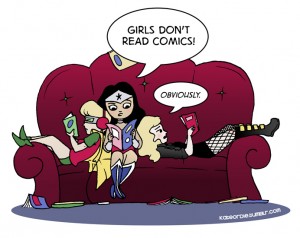 She’s 17-26 years old, college-educated, lives in the suburbs, and is new to comics. She prefers Tumblr to Reddit. She may have never even picked up a print comic. – Techhive, on the female demographic average of Comixology, the largest digital comics retailer.

I’m guessing that Comixology’s female userbase (which has more than quadrupled since the site’s launch) shares a lot of demographic similarities to a majority of our readers as well. Then again, we haven’t done a reader survey since 2011… gotta get on that.

And, it goes without saying, if you’re new to comics and reading this, ask for recommendations in the comments! If you aren’t new to comics, post your faves.