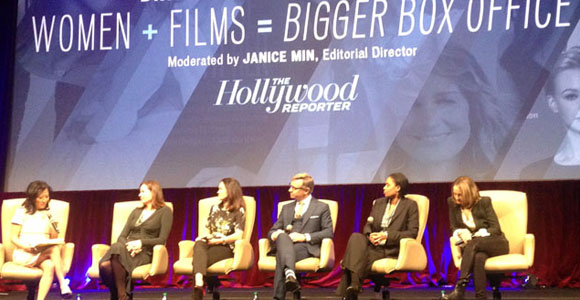 CinemaCon in Las Vegas saw many Hollywood films previewed the past few days but it’s a women in film panel that was most revealing.

Feig said he’s always tried to promote strong female characters, but was told again and again that movies with women wouldn’t work. “I was always shut down so quickly. You start to weirdly accept it,” he said.

Min recalled a number of headlines in the weeks leading up to the release of Bridesmaids in 2011 suggesting that the R-rated female comedy could never work.

“I was terrified, thinking that if I screw this up, no women are ever going to star in movies again,” Feig said.

A very real fear when you consider the climate surrounding women in Hollywood. “It’s insanity. It seems like you have to go out of your way to leave that many women out,” said Davis, who founded the Geena Davis Institute of Gender and Media in 2004. But what happens in Hollywood translates to what happens in theaters as well.

Miles — the only female to head a major theater circuit — said it’s disheartening to note that women make 70 percent to all 80 percent of all purchases, yet females only make up roughly 50 percent of those going to the movies. She questioned how much money Hollywood is leaving on the table by not turning more films that appeal to women.

Miles also noted that when she receives toys and other movie swag from studios, she rarely has anything to take home to her small niece. Rather, it all goes to her nephew. “He’s much more excited than she is about the movies. Yet you want to build an affinity for moviegoing from a young age,” she said.

When Min asked if the upcoming movie would be the best or worst thing to happen to women in film, the panelists giggled but remained largely silent. Davis responded by saying she was “speechless.” Feig begged off by saying he didn’t read it (he did joke later that would direct it), while Morrison skirted by saying she was in animation. Miles shrugged with a smile and shook her head playfully to indicate she wouldn’t be responding.

Jacobson, the only one to respond, noted, “Female desire is a very complex subject.”

Understatement of the century?