Is Women and Children First the Official Rule? | The Mary Sue 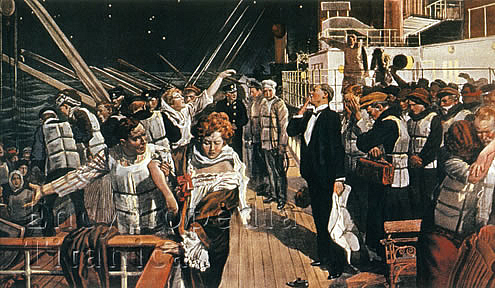 Human beings are animals — pure and simple. And every animal’s priority is its own survival. True, one’s own children’s survival is also important (the next generation carries on the existence of the species, family, etc.), but when humans find themselves in a life-threatening situation, natural instincts call for them to save themselves. That’s what happened when the Costa Concordia cruise ship sunk off the coast of Italy on January 13 — and plenty of men were seen saving themselves (including the captain), disregarding the long convention of “women and children first.” And while some people thought this was a selfish act by those particular men (because plenty more men were seen performing equally selfless acts), is the “women and children first” thing even an official rule? The answer: Nope. Not at all. So, why has it lasted all this time?

Nowhere in official maritime law does it state that women and children are to board lifeboats first during an emergency on the open seas. In modern times, passengers of a ship are assigned lifeboats according to their cabin numbers, ensuring that every single person aboard will have access to a lifeboat. However, ever since the first reported adherence to the “rule” in 1852, it has been sort of unofficially upheld during such events. And there is no real explanation to it, aside from slightly machismo reasoning.

In 1852, the HMS Birkenhead sunk in the Atlantic Ocean after catching on fire. The accounts describe the men on board choosing to save the 124 women and children before themselves. After the rescue was complete, “the splendid fellows stood, shoulder to shoulder, without a movement or a murmur, so standing saw the boats shove off, and went down with the engulfed vessel.” The Parish magazine described this as “a piece of pure and exalted manhood.” (Little known fact: Their stately, erect penises actually drowned in the icy ocean first. Heroes!)

Slate goes back even before 1852, to the 18th century, when everyone on board left fate in God’s hands, believing that whatever happens, happens, and that God chooses the survivors. So, no one was safer than anyone else.

One could speculate that the convention existed because children had their lives ahead of them and women, as the mothers of those children, should stay behind as caregivers while their fathers gave their lives. (And young women without children might miss out on having some of their own.) There is also an element of old-fashioned sexism, making the assumption that women are weaker swimmers than men. (Certainly children are weaker than adults in general, so it’s still probably safe to say we should be putting children on lifeboats first. Definitely babies. They don’t even know how their own bones work, for gosh sakes.) Nowadays, we know that there are plenty of women who are willing and able to save themselves — and probably stick around to help weaker men. There is also the matter of age — while some elderly people may require asstance, some who are in better shape might say “thanks, but no thanks.” We know now that this should be a matter of the strong helping the weak, not men helping women or vice versa.

So, old-tyme manners aside, men have no obligation to the women and children on board a sinking ship. (Nor do captains.) Some might think they look like selfish, terrible people if they jump in a lifeboat before a woman or a child. But when it comes down to it, we are hard-wired to save ourselves. Though if we are able to save ourselves, we could probably try to save someone else, too.