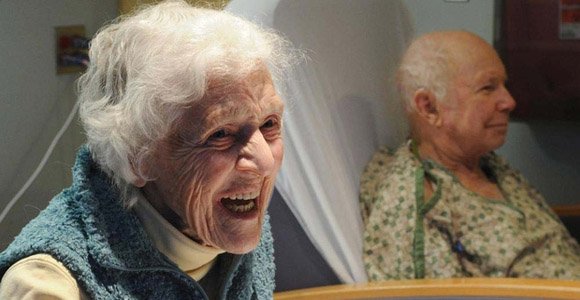 An 85-year-old Alaskan woman recently fended off a large attacker. The culprit? A moose. Anyone who’s seen one knows they are not to be messed around with but when the woman saw the animal attacking her husband she didn’t think twice about defending him…with a shovel.

The woman and her husband, Dorothea Taylor, 85, and George Murphy, 82, spoke with the Anchorage Daily News about the harrowing ordeal. The incident happened while the couple were out for a routine walk with their two dogs. “Sometimes both of us go and walk the old dog back,” Taylor told them, “But this time it was 30 below and just too darn cold out there.” But while waiting in the car, her husband spotted a moose. “He was way off. Jeez, he spotted me and he started to come right after me. So I was trying to get to the truck. But I didn’t make it,” said Murphy. When she saw the commotion, Taylor got out of the car thinking one of the dogs was being attacked by the moose. She wasn’t able to see her husband who had dived into some snow to protect himself since there were no trees nearby. “I thought he was trying to kill Fellar, the old dog,” she said. But unfortunately, the moose then turned on her. Here’s how the ADN says it went down:

Taylor raced back to the truck but instead of jumping in for safety, she released the tailgate to look for something she could use. She grabbed a big grain shovel that they keep on hand to dig out if the truck gets stuck.

She walked back to the moose, making a racket with the shovel on the road, where the snow was hard-packed. She kept shouting for her husband to get over there and help.

Taylor took a swing at the moose and it backed off a little, but then it reared up and stomped its target again. It didn’t let up.

So the 5 feet tall, 97 pounds Taylor kept going until eventually, the moose gave up. Guess it didn’t appreciate the knocks on the rump and head. The dogs chased the moose off the rest of the way and it was only then she realized it was her husband on the ground, bleeding profusely from a head wound.

Neither of them have any hard feelings for the moose even though Murphy is currently in the hospital recovering from gashes to his head and leg as well as seven broken ribs. But Taylor is right by his side, just like she has been for the last 40 years.

Of his wife’s bravey, Murphy said, “Jeez, that was a pretty hard thing for anyone to do, to walk up on a moose like that. Heck, all she had was a shovel.” To which Taylor replied, “Well, we’ve helped each other out of problems before. This just happened to be the latest.”