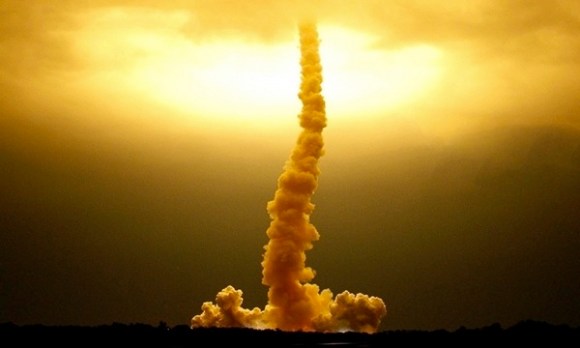 There are so many great things about this story, I don’t really know where to start. First, the basics: A woman fired her wedding ring into space. In a homemade rocket.

While New Zealander Rebecca Gibbs had already given away her wedding dress and other assorted reminders of her four-year marriage to ex-husband Stephen Page, just taking the ring to a pawn shop wasn’t going to cut it, especially considering Page had continued e-mailing Gibbs for over a year after their divorce asking to get back together. So when her current partner’s brother, who just so happens to be a rocket scientist, suggested she shoot it into space, well, Gibbs knew she had her solution:

I just thought that was awesome and it was a really liberating experience for me, and while it was for me, it was also for him, to let him know it was completely over.

A YouTube video of Gibbs painting the rocket (with the help of her dog, to make this story even better) with “flames and a baby Simba” and launching it—ring inside—from a concrete pad on New Zealand’s Banks Peninsula has since been taken down (why?!). While it’s not clear exactly how high up the rocket got, considering there was an actual rocket scientist involved I’m willing to bet Gibbs’ ring is far, far away by now. And judging by a Facebook status she posted after the launch, she’s pretty satisfied:

Been working on this for a wee while- thank you to Malcolm H Snowdon and Vaughan Snowdon for helping with the rockets, and i guess thank you to all my friends and family who supported me through my awful marriage and loved me and took care of me when i needed it the most. I really feel with putting this out there that i can finally say goodbye to the awful times in my life and move on to better things xo

I think that deserves a slow clap: