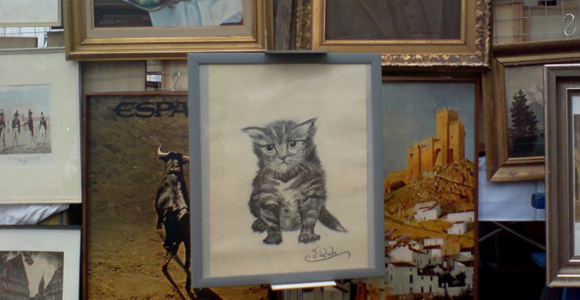 These things happen a lot more often than I thought was possible. I mean, the odds! A woman purchased a painting at a flea market which wound up being from renowned French painter Pierre-Auguste Renoir and is going to sell it for a ludicrous profit. No, the above image is not the one in question but the picture a website called What’s Up Finland? used on their post. I just couldn’t resist. The real Renoir, and all the details, are after the jump.

The woman who purchased the painting has not revealed her identity. I probably wouldn’t either. She bought a box of paintings and other items at a flea market for just $60 but had no idea there was an impressionist treasure inside.

“What had actually caught her eye in the box wasn’t the valuable Renoir but a plastic cow and a Paul Bunyan doll,” said Anne Norton Craner, an art specialist at the Potomack Company. They’ll be the ones auctioning off the painting. “She stored the rest of the box’s contents first in a white plastic bag in a shed, later in her car’s trunk and eventually in her kitchen.”

Like many people who frequent flea markets, the woman was more interested in the frame than the painting itself.

“She had apparently thrown the painting’s wrapping paper into the trash, but her mother advised her to examine the painting first before discarding it. She noticed that a plaque that said ‘Renoir’ was affixed to the painting, so she took the canvas to the Potomack Company to have it  checked,” writes ABC News. “When Craner removed the painting from the plastic bag in which it was stored, she said she was struck by the rapid brush strokes and vibrant purple and pink colors, all of which reminded her of another Renoir work.” With a bit of research, they were able to make the identification.

The auction house discovered “Paysage Bords de Seine” was last purchased in 1926 by a lawyer in Paris and they have no idea how it wound up at a flea market in Virginia. It will be auctioned off September 29th and the Potomac Company thinks it will go for between $75,000 and $100,000.

As someone who appreciates art, it hurts to know how many of these famous artists’ paintings have gone undiscovered and perhaps discarded over the years.