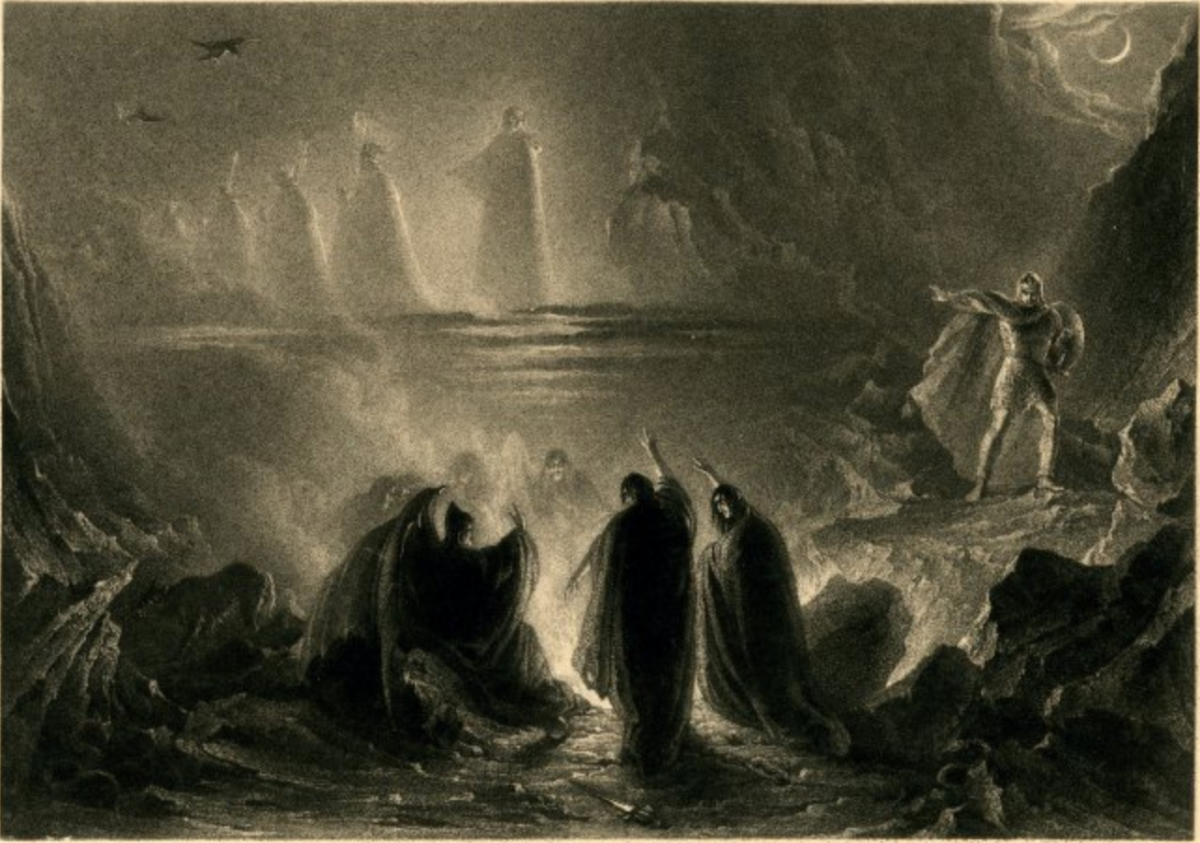 We’re here in Shakespeare month and it gives me an excuse to talk about one of my favorite things: witchcraft, especially historical witchcraft!

You know the words, so say it with me. “Double, double, toil and trouble, fire burn and cauldron bubble.” This is the first line of what is arguably the most famous scene in Shakespeare’s Macbeth, wherein the three weird sisters add a host of ghastly ingredients to their cauldron for conjuring. But it turns out many of those gross ingredients might not be so icky.

“Eyes of newt” and “baboon’s blood” are just a few of the substances the three witches use in their brew, and every single one of the ingredients sound pretty creepy. But in reality, things like “eye of newt” or “wool of dog” weren’t meant literally: they were folk names for common herbs and many of them are readily available to you for your own witchy pursuits.

In herbal lore, which was a huge deal in Shakespeare’s day, and continues to be a pursuit for many in the modern world, popular herbs with magical or medical properties weren’t known by a single name. A plant like buttercup, which has many medical properties (and can also be poisonous) would also be known as blisterweed or bachelor’s buttons or … toe of frog.

So what are all these ingredients really? Let’s look. Here’s the full speech:

First Witch: Round about the cauldron go;
In the poison’d entrails throw.
Toad, that under cold stone
Days and nights has thirty-one
Swelter’d venom sleeping got,
Boil thou first i’ the charmed pot.

Second Witch: Fillet of a fenny snake,
In the cauldron boil and bake;
Eye of newt and toe of frog,
Wool of bat and tongue of dog,
Adder’s fork and blind-worm’s sting,
Lizard’s leg and owlet’s wing,
For a charm of powerful trouble,
Like a hell-broth boil and bubble.

Third Witch. Scale of dragon, tooth of wolf,
Witches’ mummy, maw and gulf
Of the ravin’d salt-sea shark,
Root of hemlock digg’d i’ the dark,
Liver of blaspheming Jew,
Gall of goat, and slips of yew
Silver’d in the moon’s eclipse,
Nose of Turk and Tartar’s lips,
Finger of birth-strangled babe
Ditch-deliver’d by a drab,
Make the gruel thick and slab:
Add thereto a tiger’s chaudron,
For the ingredients of our cauldron.

Second Witch: Cool it with a baboon’s blood,
Then the charm is firm and good.

The first ingredient seems to be, yes, a poison toad from under a rock. This was actually might have been a well-known source of poison at the time and would probably have been literal. Then we get: “filet of a fenny snake.” This could mean a snake from a fen, aka a bog, but it also could be Indian Turnip, which was also known as “snake meat” and grew in bogs and damp places.

Now on to the fun stuff you can find in your yard or local grocer: “Eye of newt” is black mustard seed. “Toe of frog” is, as we mentioned, buttercup. “Wool of bat” is just holly, which is also called “bat wings” in many folk names, and “tongue of dog” is a weed called houndstongue. “Adder’s fork” is an herb called adder’s tongue and blind worm’s sting is … well, yes this one is gross. A blind worm is a kind of snake.

“Lizard’s leg” is a hard one. But it might be breastweed, which was called Lizard’s tail. Ir it could be a lost name. Legs and toes and hands often referred to the leaves of plants, while “tail” could mean the stalk and “guts” could mean the roots. Or it could be plain Ivy. Owlet’s wing might be henbane, another poison plant.

“Scale of dragon” sounds pretty out there, but again, it’s not as far out there as it might seem. It could refer to “dragon’s blood” which is a folk name for the red sap or resin of certain trees and it’s burned as incense and actually very easy to buy. Or it might be a reference to … tarragon. Yes, the culinary herb’s Latin name is “Artemisia dracunculus” and it’s associated with dragons. Who knew! “Tooth of wolf” is wolf’s bane, another plant that’s pretty put poisonous.

“Witched mummy,” is just as creepy as it sounds, as powdered mummies were used as ingredients by apothecaries in the 16th century, and many were fake. The maw and gulf are the stomach and throat and “ravin’d salt-sea shark,” means a hungry shark so … that’s a go for shark stomach. I guess old Bill needed something that rhymed with dark. “Root of hemlock” is pretty straight forward, and like holly, wolf’s bane, buttercup, and other ingredients, it’s infamously poisonous.

Now the worst ingredients: “Liver of blaspheming Jew.” Not only is that gross, it’s also anti-semitic! There is a plant called the “wandering jew” but I don’t think it’s related, but this could be a reference to “jew’s myrtle,” a species of broom. “Gall of goat,” is, ew, goat bile. But again, this could be a lost name. St. John’s Wort, a herb used a lot in magic and in medicine is called “goat’s ear.” “Goat’s leaf” is honeysuckle, so, take your pick.

“Slips of yew” is the bark of the yew tree. Yews are toxic and associated with death. Nose of Turk is another racist one. I found one site that posited this is a reference to the plant Turks cap, but as that flower is native to North America, I’m not sure Shakespeare would have known of it. “Tartar’s lips,” may have been tartar root or ginseng.

“Finger of birth-strangled babe” sounds pretty awful, but again, a lot of folk names for herbs did. “Bloody finger” was a name for Foxglove, another plant that is, you guessed it, highly poisonous. It was also called fairy fingers. “Tiger’s chaudron” means tiger’s entrails but was a name for lady’s mantle, a plant.

And we finish out with “baboon’s blood.” This one was probably actually blood, but … from a spotted gecko. But it’s notable that “tears of the baboon” in some old herbal records referred to plain old dill.

So there you have it. These folk names existed for a lot of reasons. To keep herbal recipes secret, to make identification easier, and maybe even just to make stuff sound spookier. Shakespeare would have eaten this stuff up (metaphorically) and he elevated it to its peak in Macbeth, which was written partially to flatter the Scottish King James, who was obsessed with hunting witches.

I would not recommend making this brew at home, for many reasons, the main one being it would be highly poisonous, but next time you’re at the store keep a lookout for eye of newt, because it’s closer than it might seem.