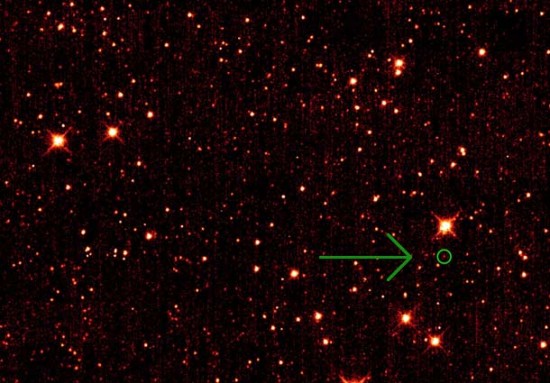 The first asteroid that shares an orbit with Earth has been discovered. The asteroid is called 2010 TK7, and is part of a class of objects called Earth Trojans that until now were only theoretical. Discovered by NASA’s Wide-field Infrared Survey Explorer (WISE) the asteroid is approximately 300 meters across. The asteroid is about 80 million km from Earth, and due to its position in the sky, is only within a visible range during the day when it can’t be seen.

WISE orbits the Earth so the images it takes are always against a dark background, which makes the light of day or night irrelevant for viewing purposes. WISE also has the ability to see in infrared, which makes warm objects (like the asteroid) easier to see.

When something large is orbited by something small, there are five points in space (called the Lagrangian points L1-L5) where the smaller object will remain there with a relatively stable orbit. The first example of this phenomenon was an asteroid spotted in 1906 in Jupiter’s L4 point, 60° ahead of it in its orbit. This asteroid was named Achilles, launching a tradition of naming these asteroids after characters involved with the Trojan War. Since then, asteroids ahead of Jupiter are named after Greeks, and asteroids behind it at the L5 point are named after Trojans.

Trojan asteroids have been found orbiting Mars and Neptune, but 2010TK7 (Trojan name pending) is the first Earth Trojan to ever be discovered. The asteroid is 60° ahead of Earth, in what is called a Lissajous orbit. This means that sometimes the asteroid is closer to Earth than others, but it is always several tens of millions of kilometers away.

Researchers hope that WISE may be able to uncover more Earth Trojans near its L4 and L5 points, because there may be other asteroids in the area that are smaller or darker and thus harder to identify. The discovery of 2010 TK7 will be published in the journal Nature.